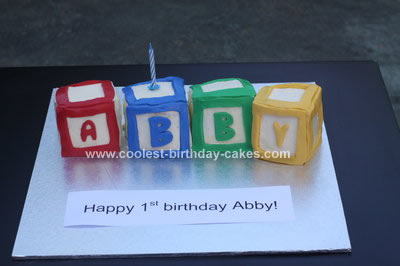 I decided to make a Baby Blocks Birthday Cake for my daughter’s first birthday after looking at some great examples on this website – thanks!

I baked 2 cakes in loaf tins and once cooled cut these into ~6cm cubes (each loaf cake made 3 cubes). Having not done this before they turned out a bit wonky, I should have taken more care/time with doing this to get the cubes more symmetrical.

I froze the cakes ready for icing the night before her birthday party. Two nights before I colored some store bought fondant. I mucked around with different colors a bit before deciding on the primary color look, which I think worked well, though was not particularly “girly” for my daughter.

The night before I made up some buttercream and did a crumb coat for the 4 cube shaped cakes. After refrigerating for half an hour I did the final coat. I was disappointed still to have some crumbs with this! And I thought I would be able to even out the inconsistencies with my cube shapes and sizes, but I am obviously not experienced enough for this (hence the suggestion to spend time getting the cutting of the cake cubes right).

I rolled out my colored fondant and cut out the square borders. I decided to do this in one piece instead of the 4 side pieces fitted together because I thought it would look neater. The squares stretched a bit as I lifted them off the bench to place on the cubes but they turned out not too bad.

I had trouble (yes, again!) with my cookie cutters, specifically the B, so had to freehand the B’s for the cake, hence the different letter sizing.

I would not attempt this cake again due to all my troubles as above, but I still quite liked the result.