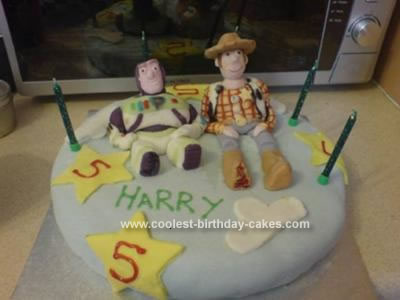 I made this Buzz and Woody Cake for my son’s 5th birthday. He’s really into toy story so I decided to do a Buzz and Woody cake. I originally was going to make a bed for them to sit on but they ended up just on a round cake.

I made the figures out of fondant which I coloured myself. They had cocktail sticks through the center of them to help them sit. Woody’s hat is made from cardboard and covered in fondant.

Next I made a large 23inch round cake, split it and filled with jam, then crumb coated and covered in blue fondant like Andy’s wallpaper. Then I added clouds and sheriff stars and popped the figures on top.

It took a very long time but well worth it to see my sons face.