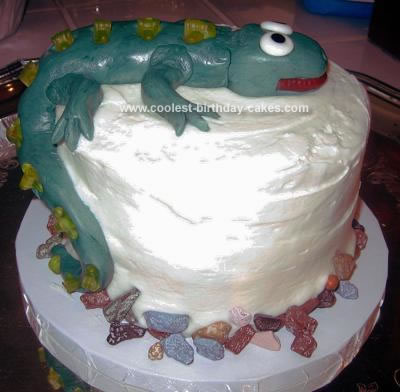 When I was asked to make a homemade cake climbing lizard cake for my friend’s son’s 7th birthday party I came to this website for inspiration and found lots of great ideas. I had my plan and was all ready to start when the little guy decided he wanted a small, plain, white cake with white frosting. There went my plan for a fondant covered rice crispy lizard lying on a log in the forest!

So from there I decided to try my hand at marshmallow fondant for the first time. I wanted something that would taste good to the kids because I knew they would be wanting to bite into the tail. I found an easy recipe on-line and then it was as much fun as play-do when I was a kid! I used my mixer to knead the fondant so it came together much faster and easier than trying to knead the sticky dough.

For the color I skipped adding it to the melted marshmallows and kneaded it in at the end. I didn’t want too pure of a green and instead went for a more mottled look by not completely kneading it in. I cut up some gummy centipedes for the scales and mouth. Then I used a foam cake the same size as my finished cake was going to be to prop the little guy on to dry. With just a few strategically placed toothpicks, he had a nice curl to his tail.

I frosted the cake with a soft marshmallow frosting so the lizard settled in nicely on top. I used chocolate ‘rocks’ to rim the bottom edge as final attempt for some color other than white. Since the cake was small there were lots of cupcakes with gummy centipedes and worms to go around. The homemade cake climbing lizard cake was a big hit with birthday boy and all his little friends at the party!