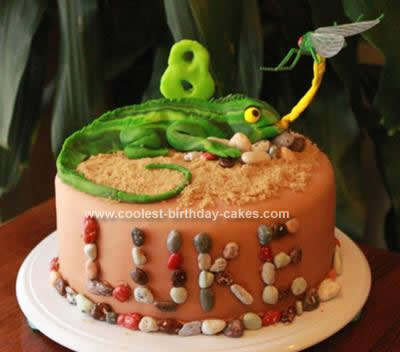 This is a Lizard Birthday Cake Design I made for my son’s 8th birthday. He had only two requests, that it be red velvet and a lizard theme. I think I accomplished my goal quite nicely. I used 2 9” red velvet rounds cut into halves and filled with cream cheese frosting and chocolate chips (my son’s idea). I covered it in brown fondant and set the chocolate rocks (purchased at Wal-Mart) with the left over butter cream colored to match the brown fondant.

I next colored fondant in 3 shades of green. I rolled strips of all 3 shades of green together to mold the lizard. Don’t over work the fondant so you can get the strip effect. I started with making the head and just moved down to the tail. I actually had a play lizard my son gave me right next to me on the counter and used that as a reference. I made the legs, created the ridge on his back by pinching the fondant between my fingers and used a scissors to cut diagonally to create the razor along his back. I rolled the eyes out of yellow fondant and used a sharpie to color the eyeballs. I had my son get me the fly from his “bug collection” in his room and used a wire attached to the bottom of the fly and ran it down the lizard and into the cake. I had to shorten it several times because the fly was a little too big and heavy.

I put the lizard on the cake with a few rock under his head and put brown sugar around him to look like sand. Presto and done. Oh, I did have a little help from my Mom and my Sister! I never turn down help when it comes to coloring fondant!