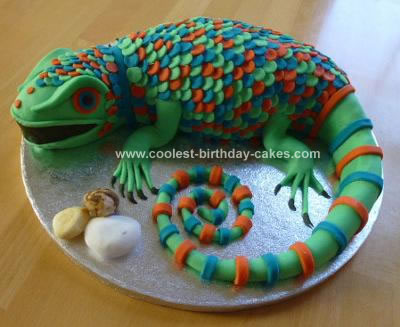 I made this lizard cake for a friend’s little boy’s 5th birthday. He is very into lizard’s at the moment and really wanted a lizard cake. I always make my own children’s birthday cakes and I really enjoy doing them, so was happy to make this one for my friend.

I started by making a large chocolate sponge cake – the cake board was 14″ diameter so it needed to be quite big! I always use good quality dark chocolate (I much prefer to use melted chocolate than cocoa powder in cakes – it just tastes much better and gives a better consistency). Once it was completely cooled I carved the cake into the lizard shape. The cake only goes as far as the second ring on the tail – from here the tail is all icing (or fondant). I cut the cake in half and filled it with butter-cream.

Once the cake itself was done it was time for the tricky bit – decorating it! I made the four different colors of icing (green, blue, orange and brown) then covered the whole cake in thinly rolled green icing. I made the legs and feet and the tail from the same green icing and attached them. After this it was a case of adding the details. I cut out lots of small circles of the green, blue and orange icing for the scales, and placed as randomly as possible (in terms of co lours anyway!) – this took quite a long time but I think it was worth it.

I used circles of icing for the eyes with a chocolate drop on top to finish them off. I cut thin strips of blue and orange icing to make the rings for the neck and tail. The eye ridges were sculpted from the green icing and attached above the eyes. I made the inside of the mouth from the dark brown icing and made lips from the green icing. Finally I made individual claws from the brown icing and attached them to the toes. I used some left over icing to make a couple of stones to finish it off!

My friend’s little boy was apparently delighted with his cake.