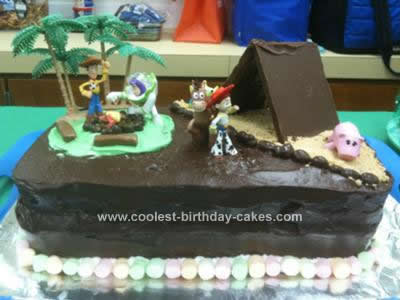 I made this Homemade Camping Cake for my five year old’s Toy Story-themed birthday party. I wanted to include the camping scene since the party was being held at the local nature center. The cake is actually two 13×9 inch cakes made from regular store-bought “funfetti” mixes (son’s choice). Once cooled, I trimmed the domes from the cakes and then used chocolate icing as filling and on the top. To finish the bottom edges, I hand piped a ribbon of icing and then places colored mini marshmallows all around. On top, I used a large Hershey chocolate bar cut in half for the tent (with chocolate icing to hold it together), graham cracker crumbs for the dirt, and chocolate covered raisins for the rocks.

For the fire area, I made green frosting and then circled chocolate covered raising around tootsie roll logs. The wood in the fire is made from cut up regular tootsie rolls (sliced in half and then cut lengthwise). The fire flames are made from sliced cherry and lemon tootsie rolls. To finish it off, I added (washed) Buzz and Woody around the fire, Jesse and Bullseye in front of the tent, and Alien and Ham next to each side of the tent.

Overall, a very easy cake to make and the kids enjoyed it, too. 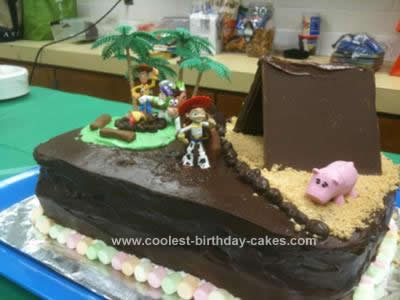