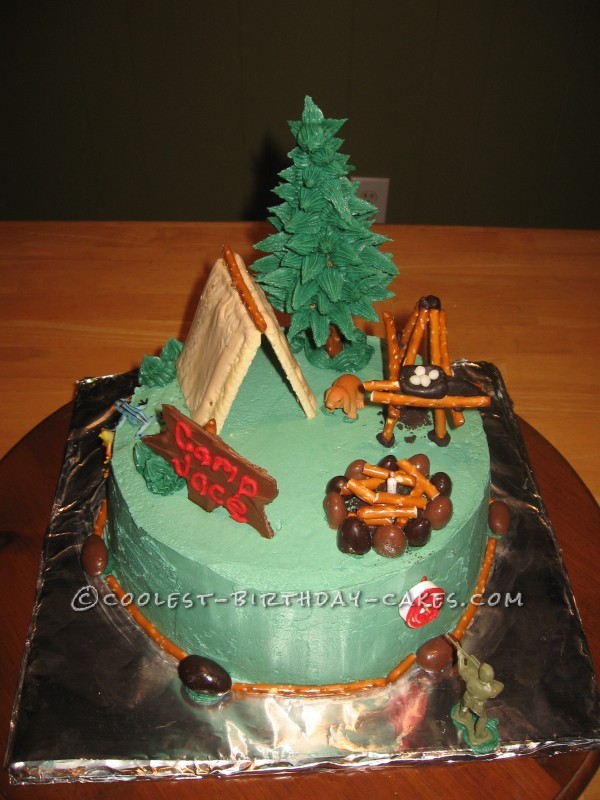 Let me just begin by admitting that if I had to do this for a living, my family would be eating very infrequently. It took me WAY longer to make these cakes than I am even willing to admit. But it was fun!  Well, all except the (first time for me) attempting to smooth the frosting part. Which I have decided is highly overrated. But other than that, the process of thinking of ideas (ok…looking at other cakes on this site and stealing benefiting from other people’s incredible creativity), figuring out how to make them work, and actually putting them on the cakes was a blast!

I made three cakes – one for my son, one for his friend, and one for the friends’ adorable little sister. Shared parties are the best…especially when there are three birthdays in about as many days!  One cake was chocolate (actually the first one got slightly overdone and turned into a trifle, minus the edges, but we won’t talk about that), one was yellow cake with a strawberry jam and cream cheese filling, and one was yellow cake with the Million Dollar Cake filling.

They were each frosted with Quick Vanilla butter cream frosting which got tinted green.

The smoothing part did not go too smoothly. SUGGESTION: do not attempt to smooth three cakes with a metal chopper. Just saying. This is coming from someone who has blistered her hands cutting vines with scissors because her husband was gone with the hedge trimmers and she wanted the vines trimmed NOW.  Some of you know exactly what I’m talking about.

For the camp signs, melted chocolate was spread on waxed paper, and before it was all the way hardened (which I sped up dramatically by placing it for a few seconds on my handy granite tile I keep in the freezer, given to me by the parents of the other two kids these cakes are for, incidentally). I cut it into the shape I wanted. After it was dry, I brushed more melted chocolate over it to make it look more like wood, and not just smooth, shiny chocolate.

The kayak and paddle were made of chocolate clay, colored to match our own kayak. I was attempting (unsuccessfully, I might add) to replicate the molded out foot rests and seat on our kayak but my 8 year old daughter wisely advised me to give it up and be happy with having made something resembling an orange kayak.  I decided to take her advice.

The water was decorating gel from the baking aisle, put straight on top of the green frosting with nothing in between. The “rocks” were chocolate covered nuts, sometimes cut in half when they were too huge. The targets were lifesavers with red tube icing.

The Chippewa kitchen was held together by small bits of chocolate clay. That was after several unsuccessful attempts to lash the pretzels together with mint dental floss.  Please don’t ever try this unless you are deliberately trying to make yourself (or someone else) insane. And NO, the roundish white items in the cast iron pot were NOT meant to be whole eggs (very funny, people, and no, I won’t quit my day job!), but pieces of potatoes from the now infamous “steak and taters” meal that was last cooked in the Chippewa kitchen where we go camping.  The trees were, as others on this site, sugar ice cream cones frosted with a star tip, drawn out to form the branches, and were surprisingly easy to do.

Remarkably, all three cakes survived the car trip (with prayer!) to the site of the party!  When it was time for the birthday song, we actually lit the little candles that were stuck down in the camp fires, and let the kids roast the tiny marshmallows on toothpicks.

If you are thinking about attempting something like this and you’ve never done it before, be encouraged that if I can do it, you can too!  This was far beyond anything I have ever attempted in cake-land before, and none of it took much skill – just a willingness to spend some time and be creative to bless some awesome kids on their birthdays!  And while my son assured me that these were the coolest cakes EVER, his friend’s reaction really made it all worth it.  When he saw the cakes at his party, he just went from one to the other, gazing at them with that look of wonder that only an innocent child can have.  His shining eyes told the whole story – the camping cakes were a success. 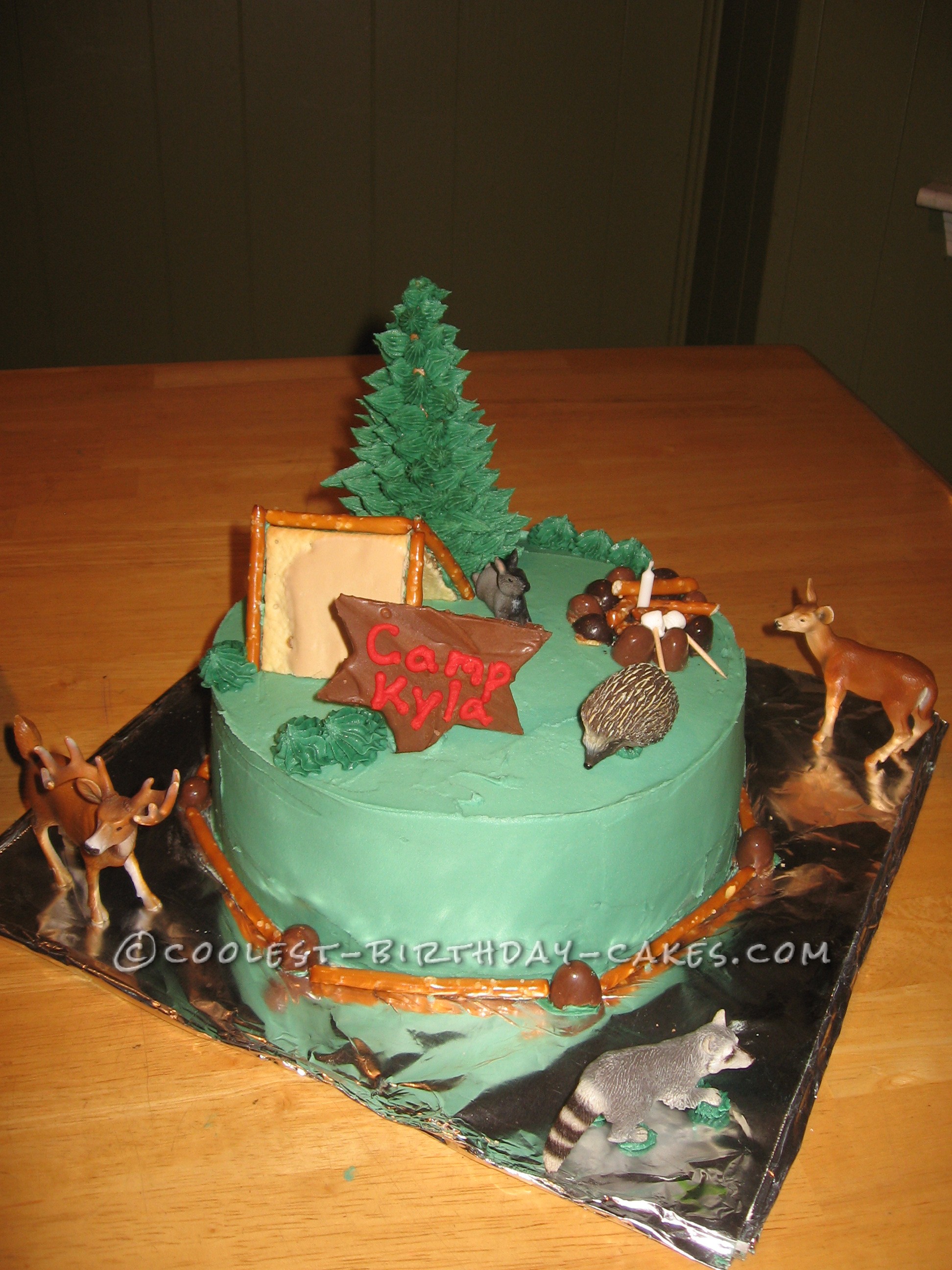 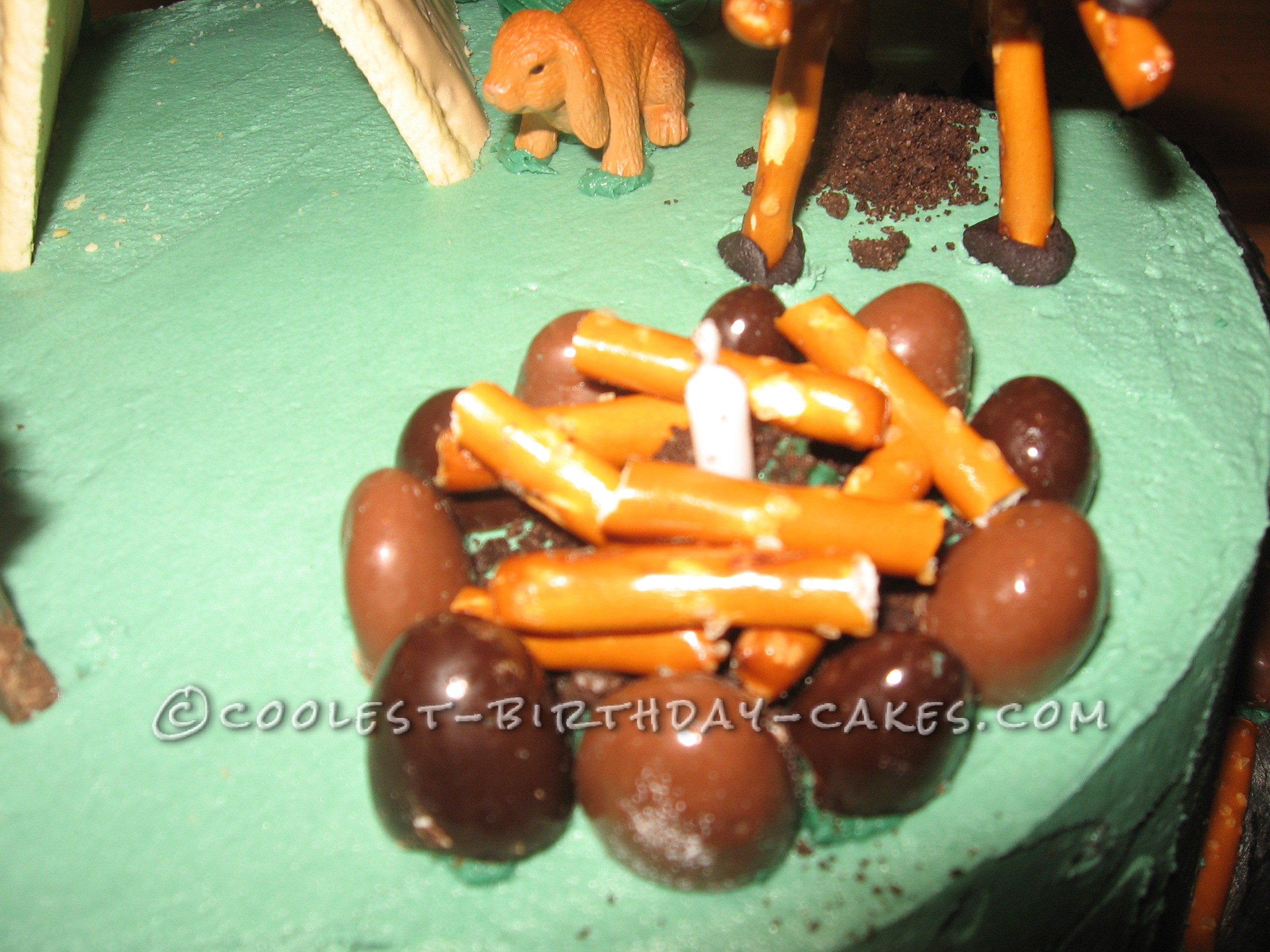 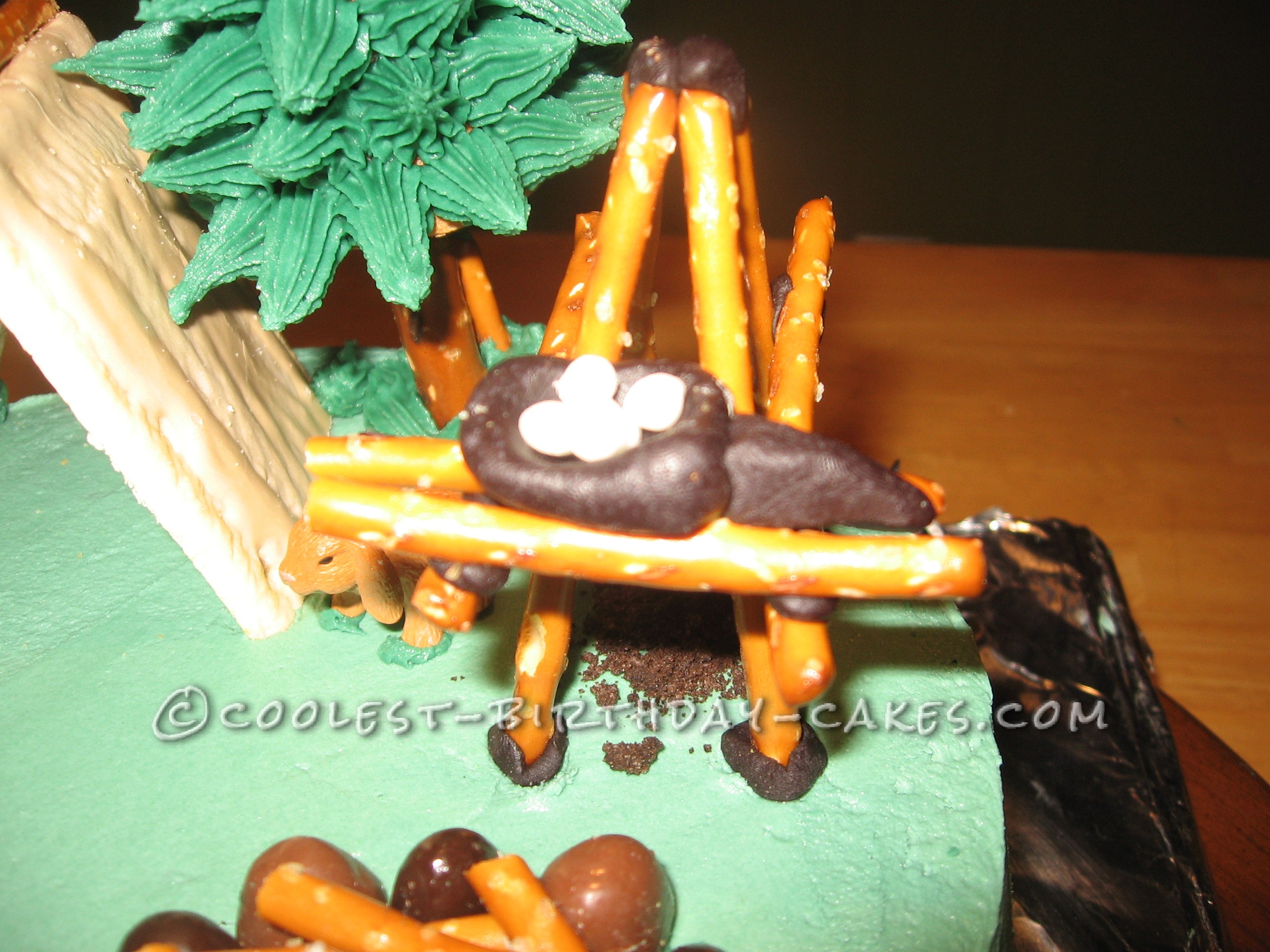 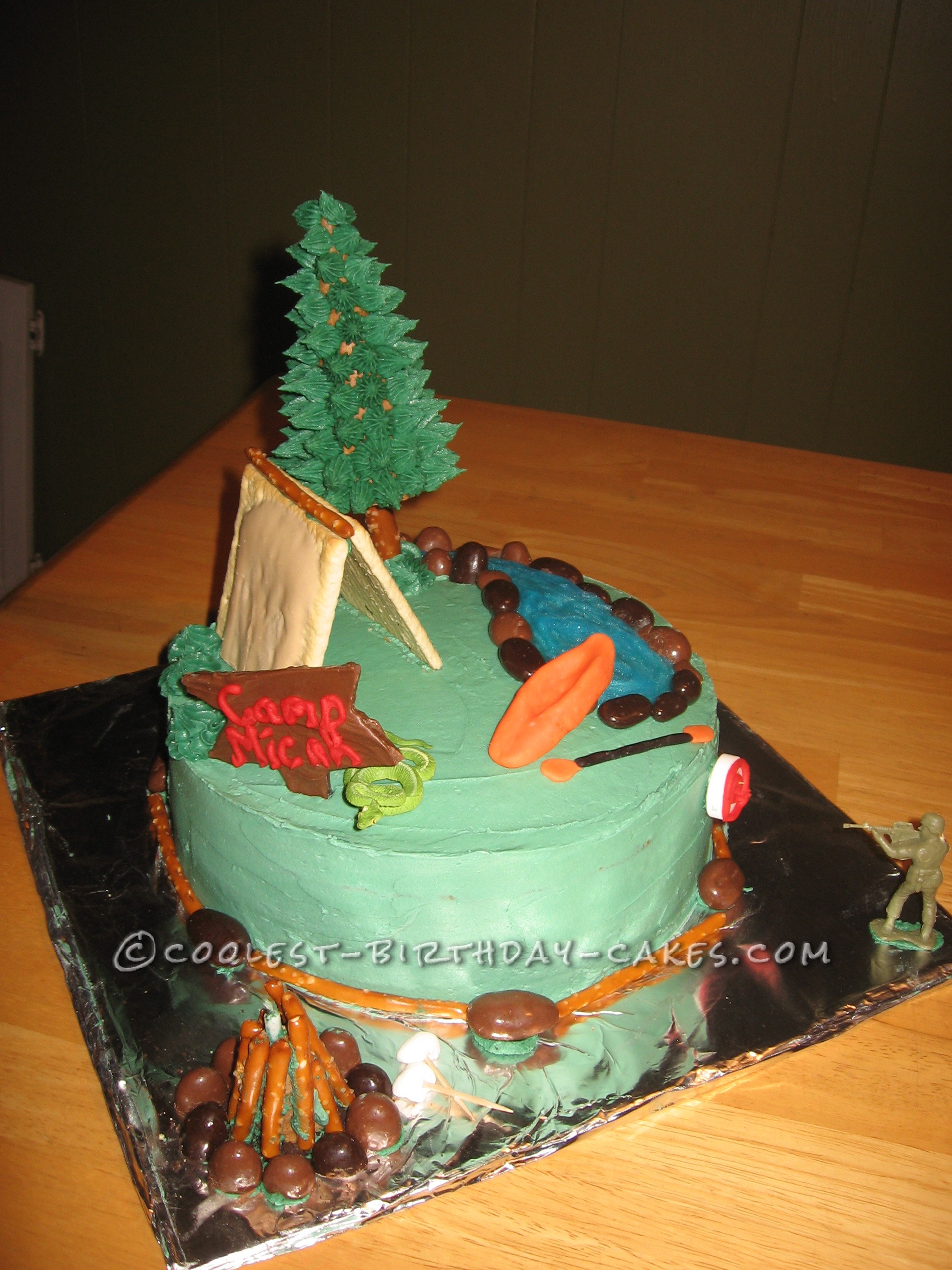