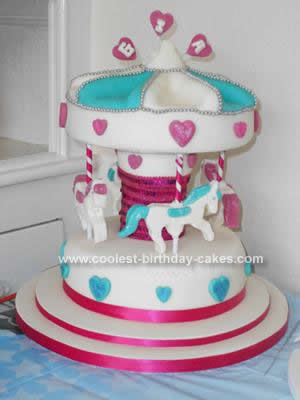 My sister in law and I decided that we would bake a cake for her daughter’s 1st birthday party. We were not 100% sure on what type of cake to make until we had a suggestion from somebody to make a Homemade Carousel 1st Birthday Cake. This seemed very adventurous but we were both up for the challenge and my gosh a challenge it turned out to be!!

We started off by researching other carousel cakes on the internet to get some ideas. After searching far and wide we could not find any cakes that looked like what we had in our minds. Instead, we used our own imaginations and drew our ideas for the cake on paper.

The bottom tier of the cake is madeira sponge filled with butter cream and jam covered in fondant. It is sitting on two cake boards that were also covered with fondant to give a smooth finish. The pink ribbon was used to complete the look.

The top tier of the cake was a solid Madeira sponge on a cake board. Triangles were cut into the sponge on the roof leaving a ridge in between each one to create effect. The ridges were made stronger by using cake pop mix to build them up for extra support. Each triangular section was then individually covered with fondant icing, alternating between blue and ivory. To complete the roof we used silver balls and fondant hearts.

The horses were the hardest part of the cake. We tried making them three different ways before settling with the ones that you can see in the photo which were made using fondant. There were a few problems encountered with trying to get the horses to stay stuck to the dowels without falling down but royal icing did the job and eventually they stayed in place.

Finally glitter was sprinkled on the hearts and horses to give a real magical vibe to the cake. It was a success and we are very proud of what we managed to achieve. 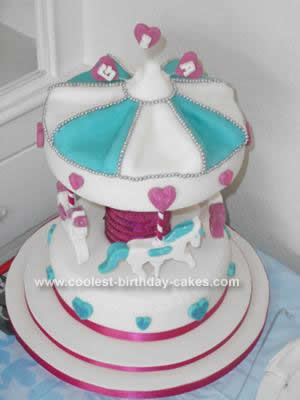 Coolest Carousel Cake for a Princess