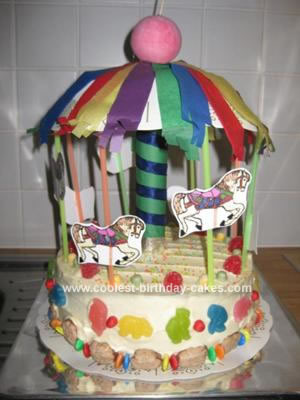 I made this Carousel Birthday Cake for a friend’s daughter’s 5th birthday, which had a circus theme. The idea came from other examples on this web page. The base was a double layer chocolate cake made in round 9 inch pans with white butter cream frosting. The basic cake was assembled, then top covered in sprinkles and gumdrops, then colorful M&M chocolate candies, gummy animal candies and animal cookies around the edges.

I made the top carousel decoration separately and assembled the cake at the party. I started with a cardboard cake base which was cut and stapled to be the roof, then covered this with colorful paper streamers and a red foam ball (which held a paper flag on a toothpick saying “Happy Birthday Elsa”). Center support column was an empty paper towel cardboard roll, covered with blue and green ribbon. I wrapped the base in aluminum foil so it could be pushed into the top of the cake about an inch right before serving. The 8 horses were color photocopied on heavy paper (found on a free clipart web page), cut out and attached to colorful straws with a hot glue gun. The straw had also been cut slightly shorter than the center column, so they would barely touch the cake top (not pushed in).

This cake was a hit with everyone and easy to do most of the prep work beforehand.