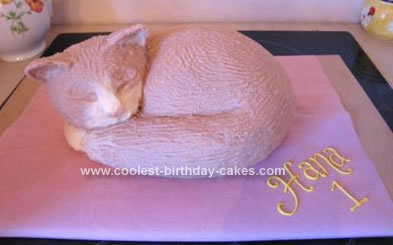 Our little 1 year old daughter is IN LOVE with cats, so it was an obvious choice for her first cake to make her a cat birthday cake.

My first step was to check out the other cool cat cakes on this website for inspiration! I used my mum’s yummy chocolate cake recipe, and baked one sheet cake and one log cake. I cut the sheet cake in half, placing the two halves on top of each other, and put the log cake onto one end to turn the whole cake into a rectangle. Then I carved it up into the cat shape, and after it was all ready, I glued it all together with homemade cream cheese icing, with a bit of passion fruit for extra tang!

Then I iced the whole thing with the cream cheese icing (without passion fruit), colored light brown by using cocoa. TIP: Pipe it on with a nice, big piping bag, and then smooth it afterwards. In my case, I used a fork for the “smoothing”, because I wanted it rough and furry. ANOTHER TIP: Before piping, the icing suddenly turned runny so I made a second batch, which also turned runny. After consulting the internet, I added *much more* icing sugar, and it stiffened up nicely!

The only inedible part of the cake were the cat’s ears, which I shaped from thin cardboard and pushed them into the head. Then I covered them with icing, too. They held up perfectly – I was very satisfied! The trickiest part was detailing the face, because there wasn’t much space. Luckily, it turned out OK.

My daughter (and everyone else at the party) really loved the cake, and she couldn’t stop pointing to it since the morning and making cat noises! I felt sorry to slice it up, since she so obviously was totally in love with it! (I was glad that we got to keep the cat’s head to slowly slice up during the following few days).

The miniature ice creams were made using the same method, and I dipped them into melted cooking chocolate, then piped royal icing (thinned a bit with water) for the “topping”. Then I sprinkled them with 100’s and 1000’s, topped them with a Smartie, and they were good to go!

No-one at the party had seen anything like these before, so they were a huge hit! Quite time-consuming, but I love an artistic challenge! (and at least I used up the birthday cake off-cuts). 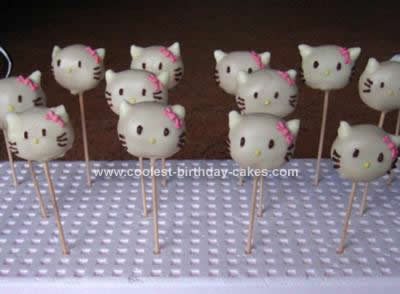 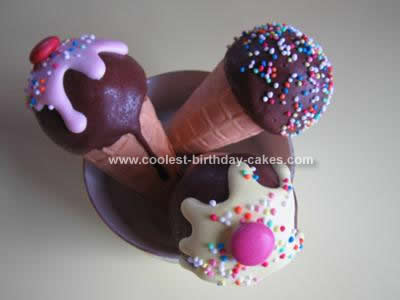