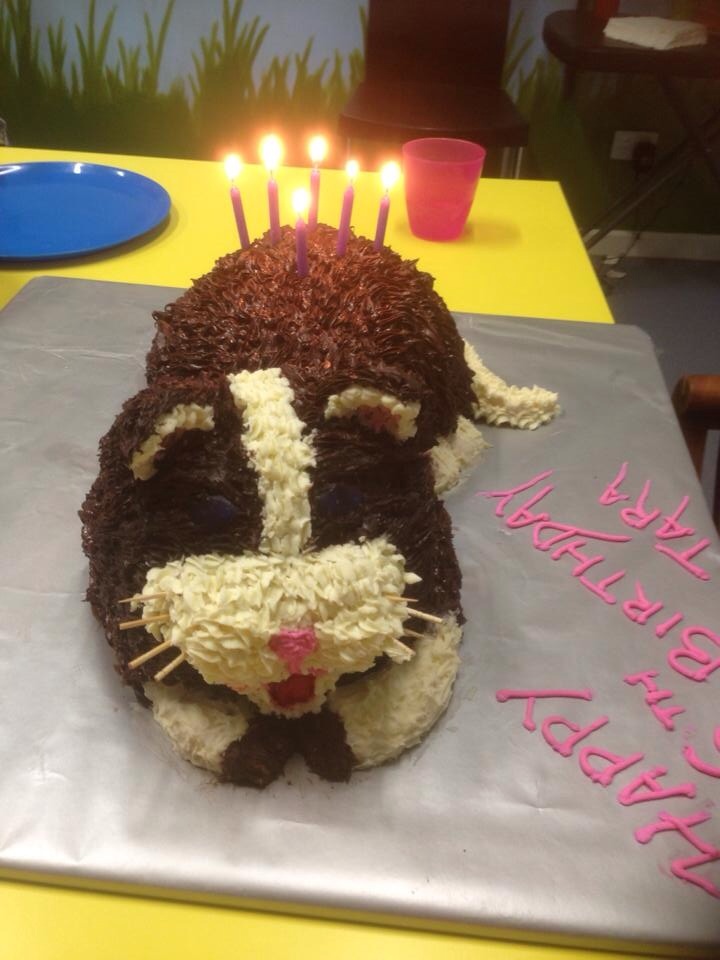 My niece has a fascination with cats and since her last birthday has been hounding her mum to make the ‘cat cake’ , 2 days before the party a phone call from my niece saying that her mother wasn’t making a cake and wasn’t even going to her party, and she was beside herself (she was turning 6) so time to go into overdrive, I baked 4 choc mud cakes and a red velvet cake, not havn any clue how to start the cake, I used a dolly vardon tin for the head and 2 round tins for the body, with a square just in case! with a lot of carving to get the right shape, trying to figure out the best way to do the nose I used fondant and shaped it to get the right shape not thinking how heavy it would be to stick it on the cake, it kept falling off, using buttercream icing and skewers, flower glue, Ganesh to no avail, lucky cats have whiskers and used tooth picks accordingly, i decided to use white choc and choc Ganesh for the piping on the cat thinking it would be a lot quicker as I was running out of time fast, this was not the best option, my hands run exceptionally hot. And I had 4 piping bags of each Ganesh on the go with 3 ice packs out trying to keep them cool in between swapping every 30-45 seconds as it was melting too quick, using a star nozzel or 8 this seemed to work to look the closest to fur,  the eyes were made using icomalt which was painstaking as it sets so quick, I moulded the tail, ears and the paws out of gum paste which was by far the easiest part of the cat, the only inspiration my niece would ‘let me use’ was a figurine of a cat that she had it was all of 5cm big, but she knew what she wanted, too see the look on her face was priceless and made all the pain and suffering worth it