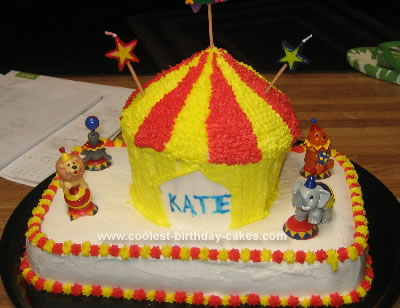 I got the idea of a circus/ carnival party for my daughter’s third birthday after seeing a TV show where they did it. I found this Circus Tent Cake idea on this site and adapted it to fit her party.

This cake took two mixes to make. I started with a 9X13″ cake and a giant cupcake using the pan from Wilton. I then iced both cakes in white butter cream. I tinted some more butter cream in yellow and red for the tent colors. I placed three wooden dowels in the center of the 9X13 to support the weight of the other cake. I assembled the tent by placing the top of the cupcake onto the bottom. They bake separately in the same pan.

I then placed the entire tent onto the bottom 9X13. I used a basket weaving tip and yellow icing to make the tent sides, leaving the front open and pulled back. I then used icing gels to write her name in the opening, you could probably use icing and a #2 round tip and get a better result. I then drew out the tent top outline with a toothpick and used yellow and red butter cream in a star tip to make the stripes in the top.

I finished the tent with some star candles. I used a larger star tip and the same yellow and red icing to finish the boarder on the bottom cake, both the top edge and bottom edge. The animal figurines I found on the Wilton web site. This cake was so cute and went with her party great. All the kids loved it and they all asked for the animals.