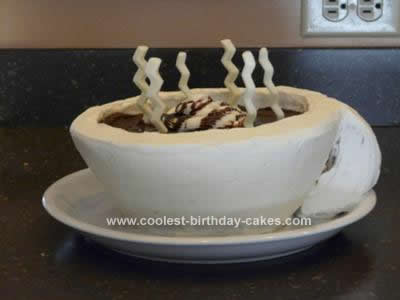 This Coffee Cup Cake was made for a friend’s daughter’s 19th birthday. She just started college and is really into her coffee. I used the Wilton Wonder cake pan and inverted it so the large end was up and the small end down. I did trim a small amount from the small end so there was more surface on the plate.

Then I scooped out a portion of the top (about 1 inch) so there was an edge to the coffee cup. I iced the cup portion with white buttercream and the “coffee” with chocolate buttercream that was piped in then smoothed with the back of a spoon.

I’m still learning cake decorating and am not good with fondant so the handle is made from a cake doughnut that I trimmed and attached with icing and toothpicks. The whipped cream is piped buttercream and the drizzle is Hershey syrup. I used a candy mold and made the steam with white chocolate. I placed the cake on a white dinner plate before decorating and once I was done, it became the saucer for the cup.

I know it’s not perfect, but I love trying new things and many of the ideas for the cake came from this site. I hope this inspires someone else as I have been inspired.