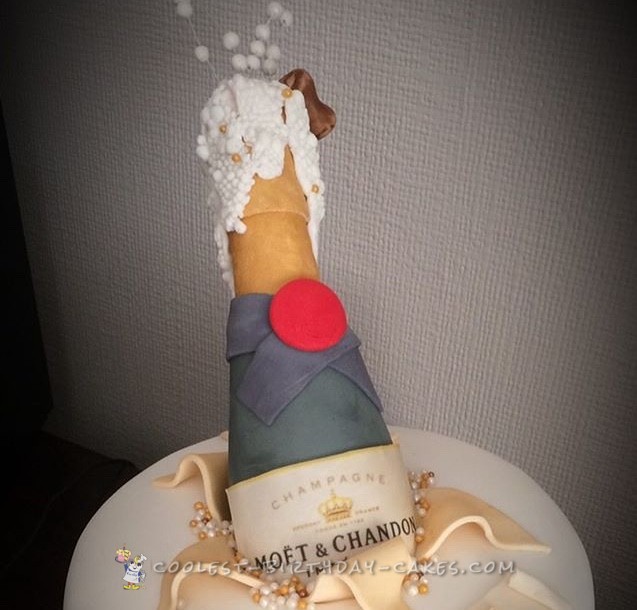 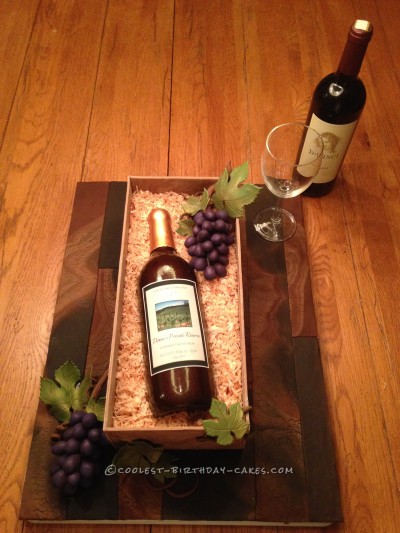 My Mom’s 60th birthday was coming up and I wanted to make her a special wine bottle cake.  My sister thought I should make something funny (a roll of toilet paper that read “You’re old as crap!  Here’s to wiping another year away”).  Besides the fact that my very conservative grandmother thought it was inappropriate … Read more 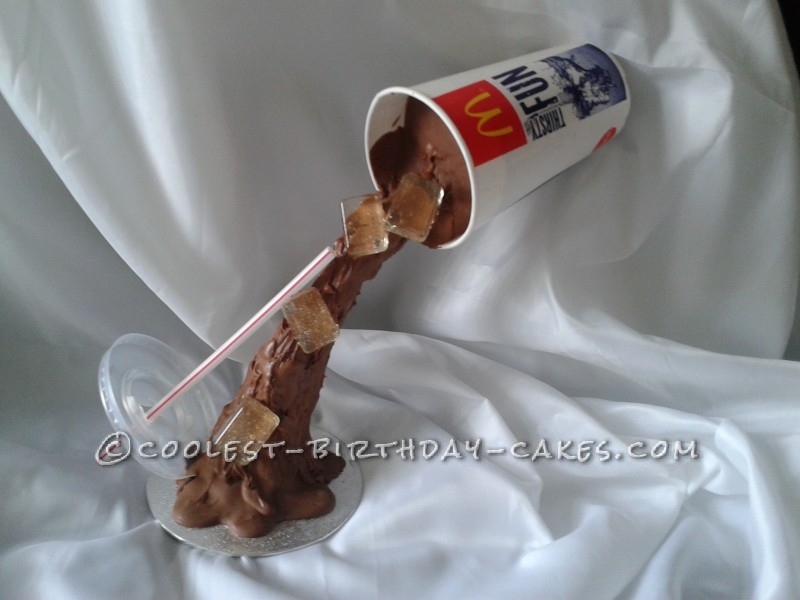 This was just a bored Sunday afternoon experiment. I had just enjoyed McDonald’s and thought up this anti gravity cake idea! Not knowing if it would work. But hey, it really worked! I completely cleaned and dried the large sized McDonald’s cup and lid. In addition, I whipped up a simple Victoria sponge cake in the oven! Once the … Read more 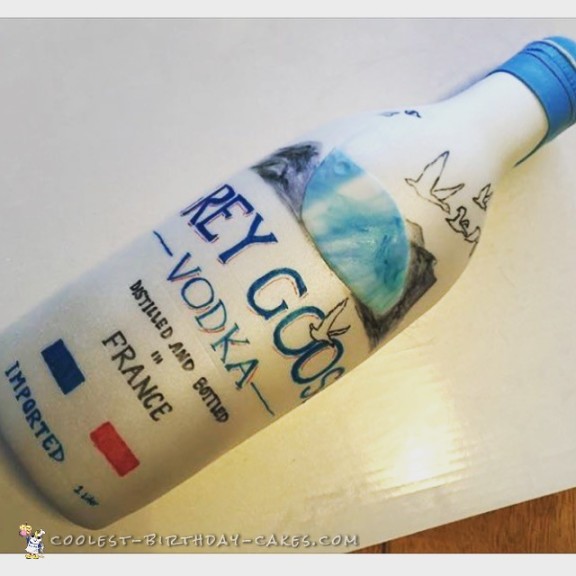 This cake was a custom order for a clients birthday. They requested the Grey Goose bottle as their cake! I started with baking a 9″x13″ cake, cut it length wise and stacked them with some buttercream in the middle. After a bit in the fridge I carved out the shape of the bottle, covered it … Read more 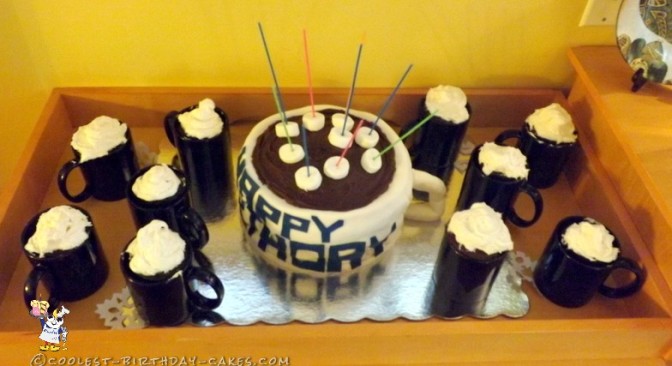 Every year for my daughter’s birthday, we pick a theme and go crazy.  Everything having to do with the party coordinates with the theme. This year’s theme was ‘Winter In August’ and the cake was no exception.  It was actually the easiest cake I’ve done so far.  This hot chocolate mug cake  turned out cute … Read more 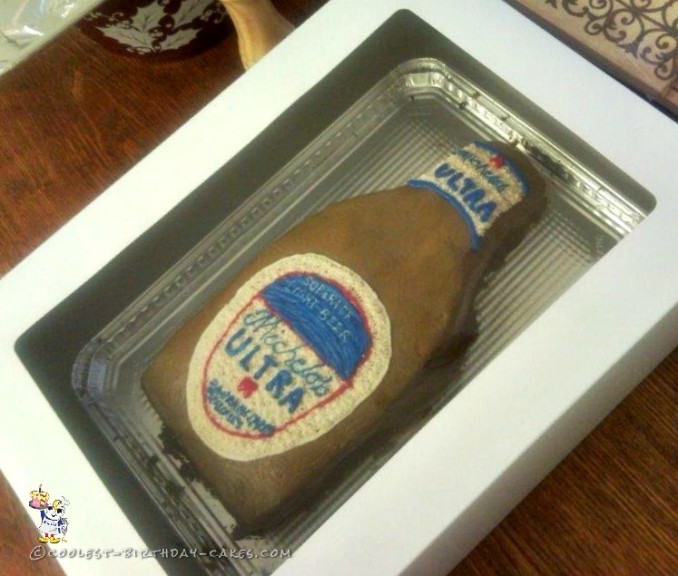 I made this chocolate beer cake for my brother who turned 50 years old. Michelob Ultra is his favorite beer and I was so excited to make it in cake form for him. When he saw the cake he was so happy and kept telling me how much he loved it. Michelob Ultra Beer Cake Instructions … Read more 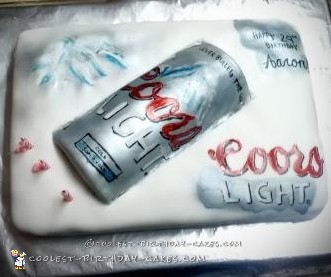 I am 16 years old and I made this Coors Light birthday cake for my older brother’s’ birthday. Mom said, “just make him a nice dessert,” but I was like “heck no!” I have made it my job to create everyone in our family a birthday cake reflecting who they are. My brother has always … Read more 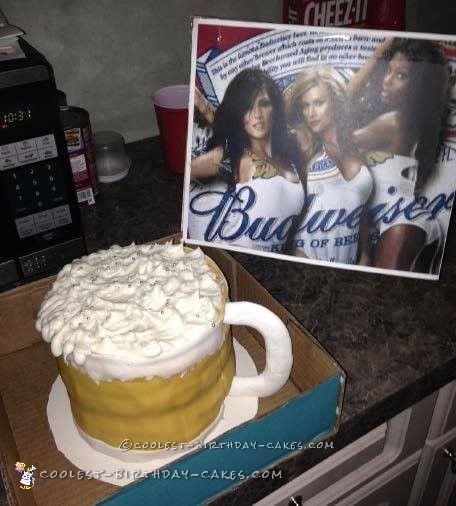 I made this beer mug cake as a surprise for my son’s birthday. Beer Mug Cake Instructions I started by making three 6″ round cakes. I iced between each layer and then I wrapped them in dark yellow fondant. I cut two strips of white fondant. I made the bottom one even, and for the … Read more 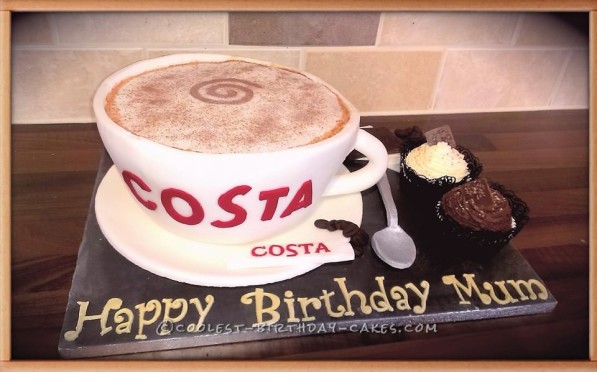 I was asked to make this coffee cup cake by a friend for her mother-in-law’s birthday. Coffee Cup Cake Instructions I baked a large batch of Victoria sponge and cooked it in a large pudding bowl. Once cooled, I cut it into 3 layers and spread each layer with jam and buttercream. I started with the … Read more 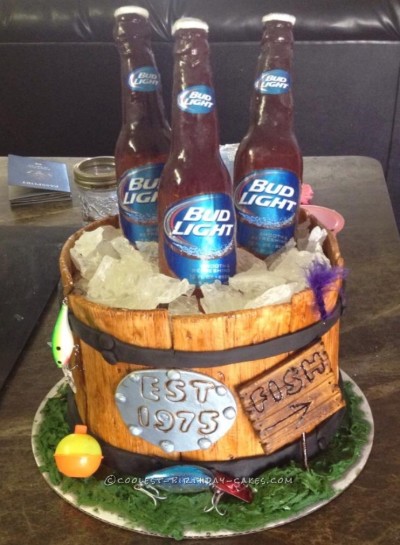 Everything included in this wooden bucket cake is edible except for the tackle and the beer bottle labels. The beer bottles require some time to make so plan ahead if you want to make this cake. How I Made This Wooden Bucket Cake I started with a 9″ round cake. I cut the “wood planks” … Read more 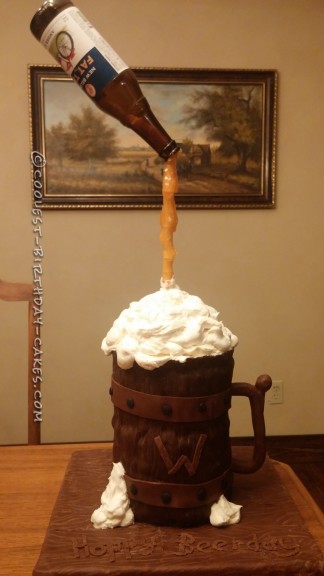 I made this anti-gravity beer cake because I am throwing somewhat of a surprise birthday party for my husband’s 40th birthday. The theme for the party is microbrews. The invitations went out saying, “Join us for a Hoppy Beerday.” I am going to have many types of beer chilled on ice in my row boat, a … Read more 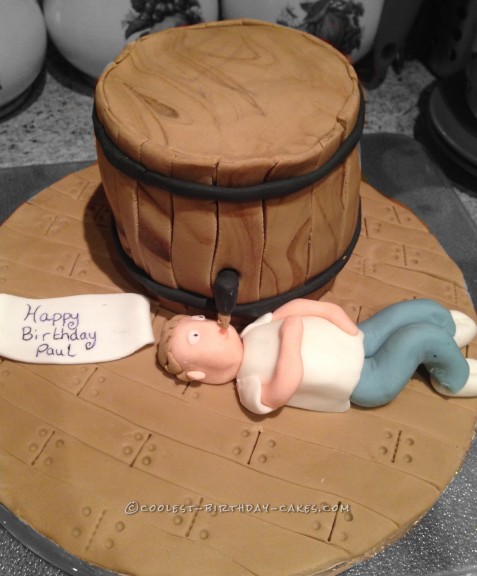 I love baking cakes and I only need an excuse to get started. My Husband’s birthday is January 1st and he was 53 and I just had to make him a cake. He likes to go to the pub to relax and I decided I wanted to make a beer barrel cake. This is how … Read more 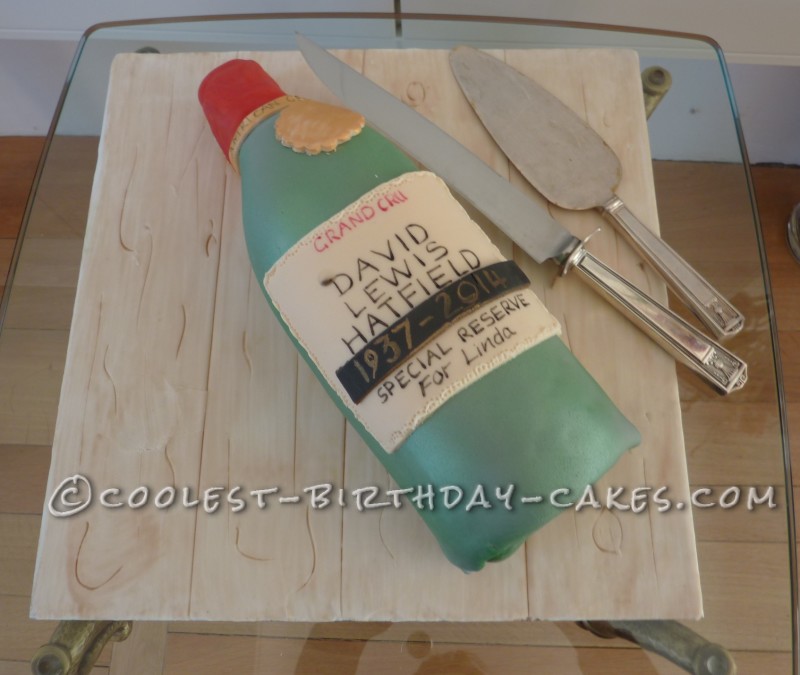 I made this remembrance cake when our dear friend David passed away. He and his wife, Linda, are well known in the expat community here in France. His death was a shock and when Linda asked me to make a cake for the wake I was very honoured. We wanted to give David a good … Read more 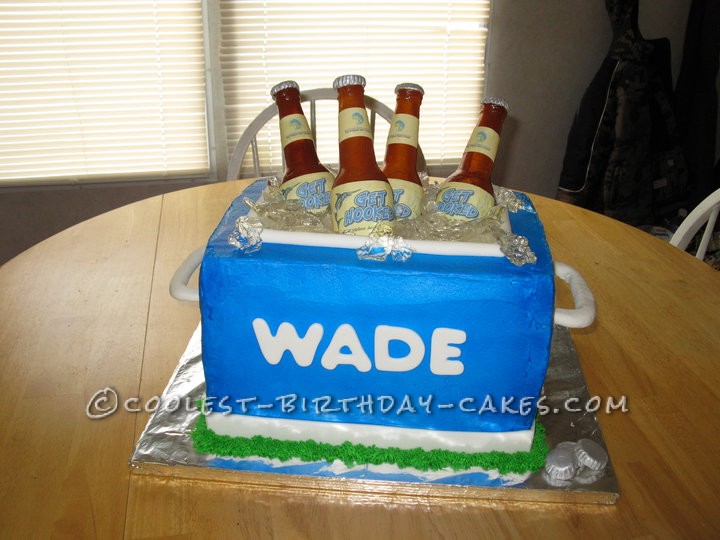 I made this Cooler Cake for my husbands birthday and it was a blast to make! I started with sheet cakes I baked and let the fun flow from there, I stacked them and covered them in icing and fondant and had some painting fun with my airbrush, but the most crazy fun and a … Read more 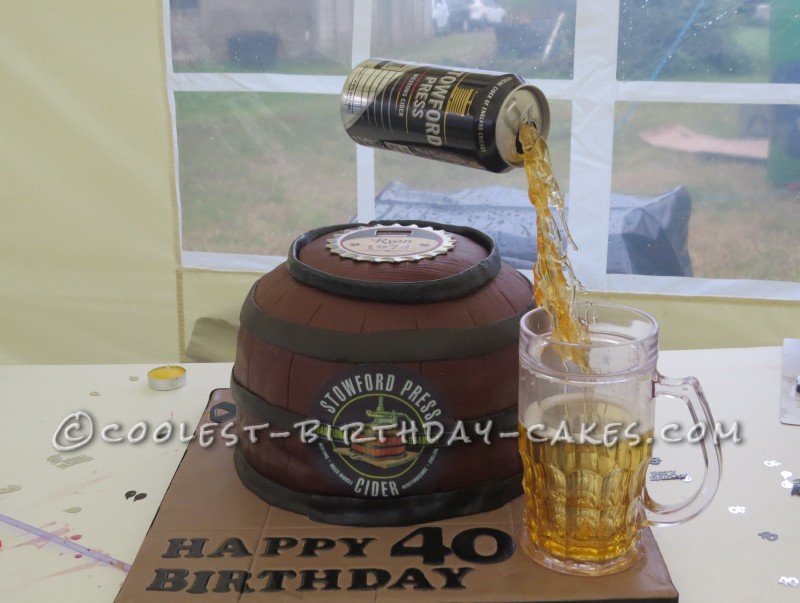 I made this anti gravity cake for my son-in-law who loves Stowford Cider. It was for his 40th birthday and I wanted something with a WOW factor. Designing the Barrel Cake The cake was made from a 6 layer checkered cake using a Zenker 24cm set of 3 checkered cake tins (which I bought for … Read more 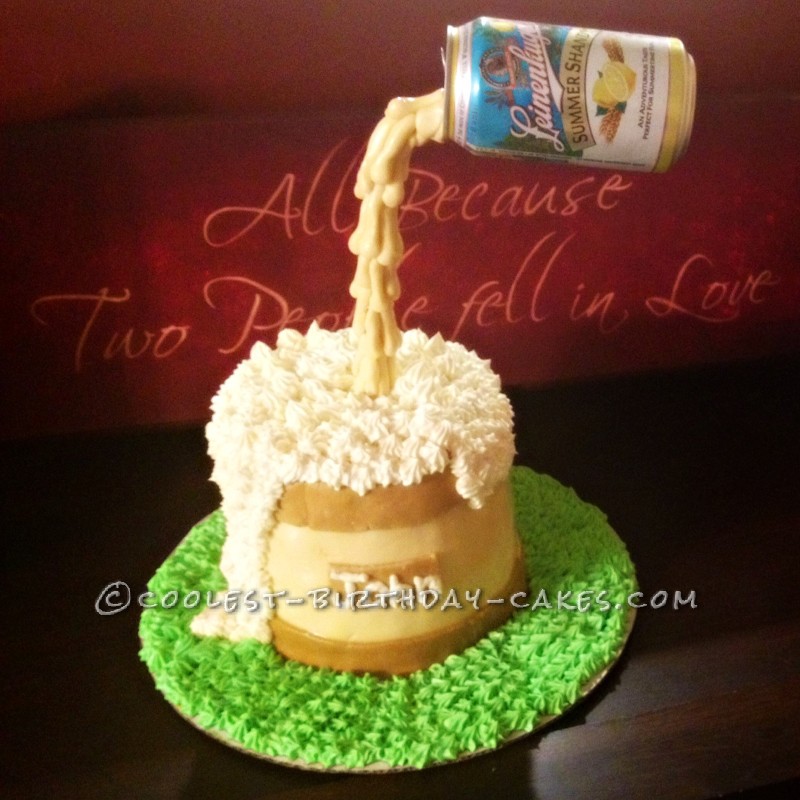 I made this anti-gravity beer mug cake for my father’s birthday and he LOVED it! It was a chocolate cake with chocolate ganache coating. The fondant was marshmallow fondant and the suds were buttercream. Everything was made from scratch and I can provide recipes if anyone is interested. To make the cake I used a … Read more 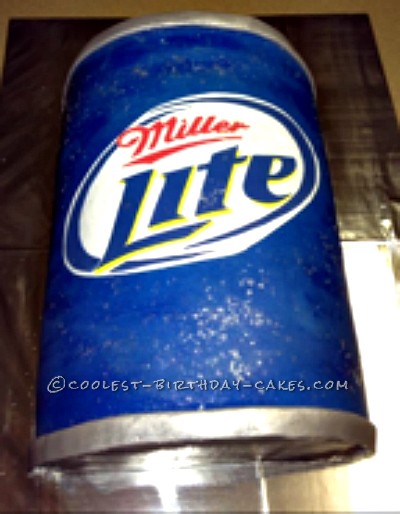 I was asked if I would make my favorite cousin in law a cake for her 4? birthday. I automatically knew what I wanted to do. She is a big Miller Light fan, and this party was going to be at a bar, so a big Miller Light beer can was perfect. I thought this … Read more 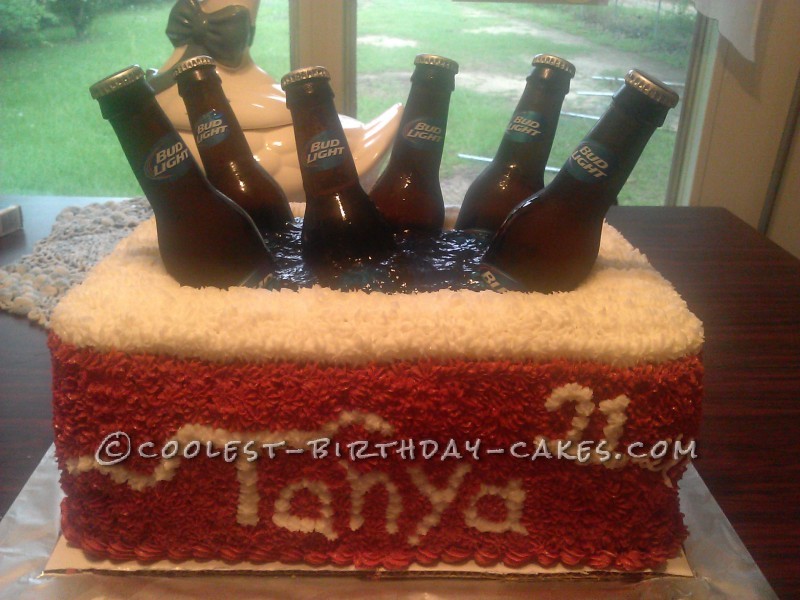 I was asked to make a 21st Birthday cake for my son’s friend.  He wanted me to somehow use beer bottles in the cake idea.  Between him and I we came up with a cooler filled with beer.  We tried to also make jello shooters (with Vodka) but they did not get hard enough to … Read more 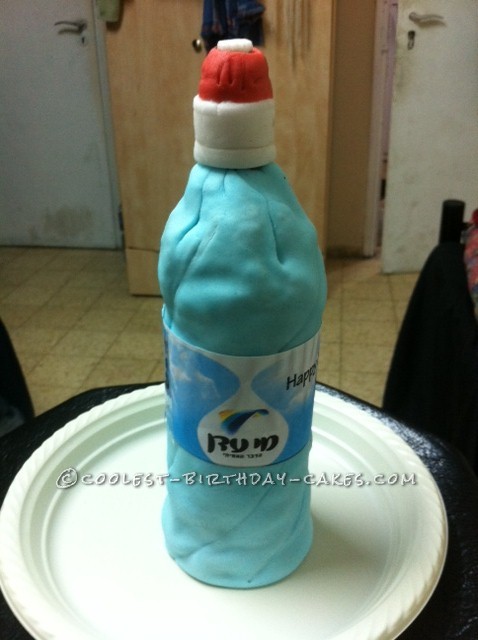 This water bottle cake was for a friend who loves to drink water! He always has a water bottle with him so I thought it would be cute if his cake looked like one too. I made a chocolate cake and then cut out circles from it, and stacked them with icing in between. I … Read more 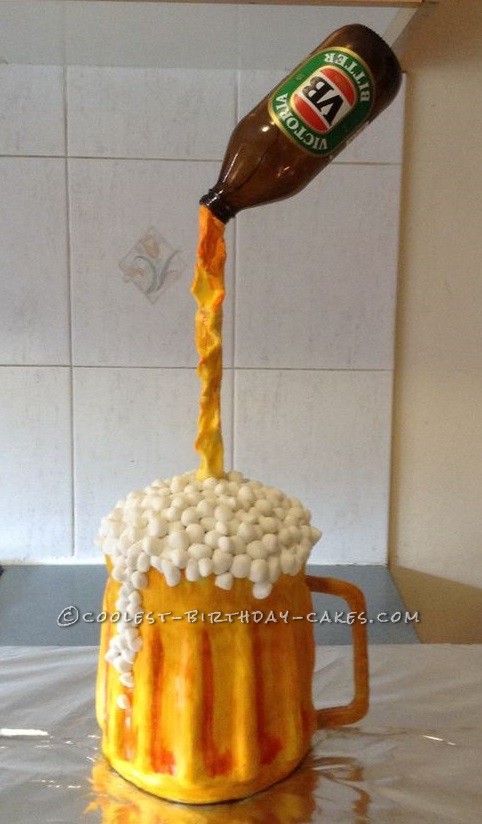 I made this suspended beer mug cake for my husband’s grandfather who was turning 90 years old. He owned a pub back in the day, so I decided to make this beer mug cake. I used 4×6″ round cakes with a dowel supporting the cake. I made the cakes the day before then I froze … Read more 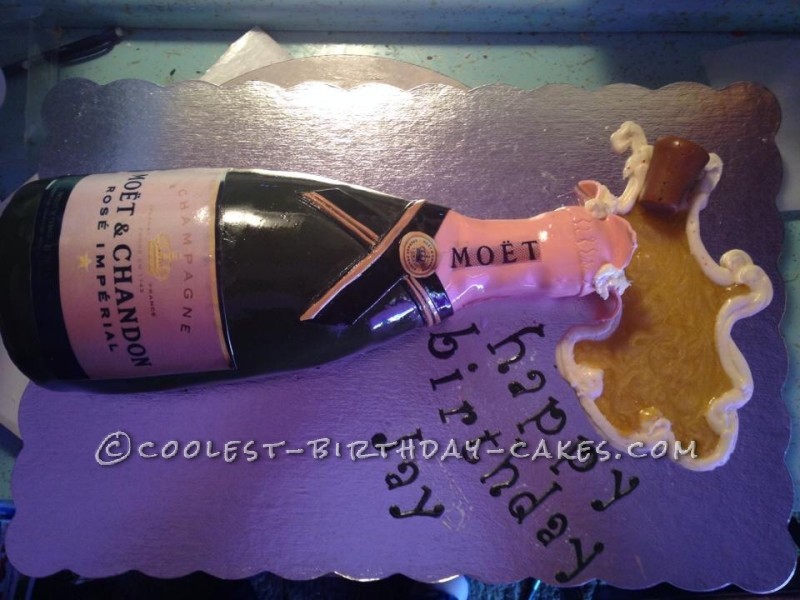 I made this birthday champagne cake for a young man celebrating his 30th birthday! A milestone definitely worth toasting for! Building the Cake I started by baking a half sheet cake and a 6″ inch round. Red velvet was the flavor requested by my client. I cut the 6″ in round exactly in half and … Read more 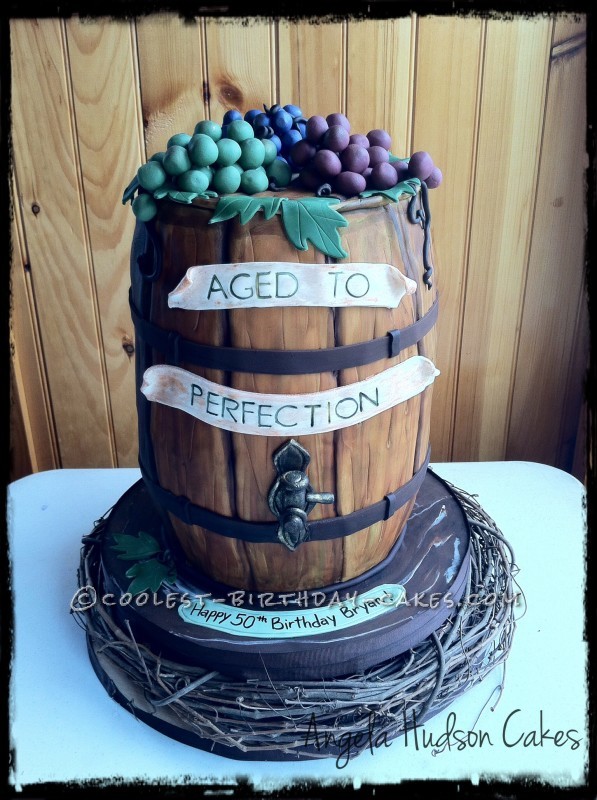 My client said she was having a surprise 50th birthday party for her husband at a winery and wanted a cake to go with that theme.  I searched wine barrel cake ideas online and found a few that I liked, especially one by The Cake Zone. I created the cake in 3 sections supported with … Read more 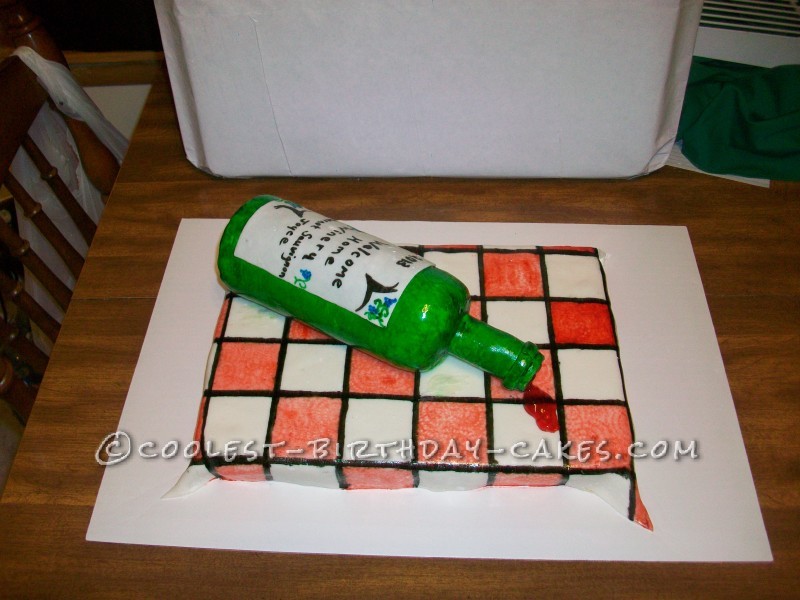 A friend of mine wanted a welcome home cake that showed his girlfriend how much he missed her. I thought I would try to make a bottle of wine cake. I knew it would be a challenge but I really love to make cakes that are unique. First I planned out what I wanted to … Read more 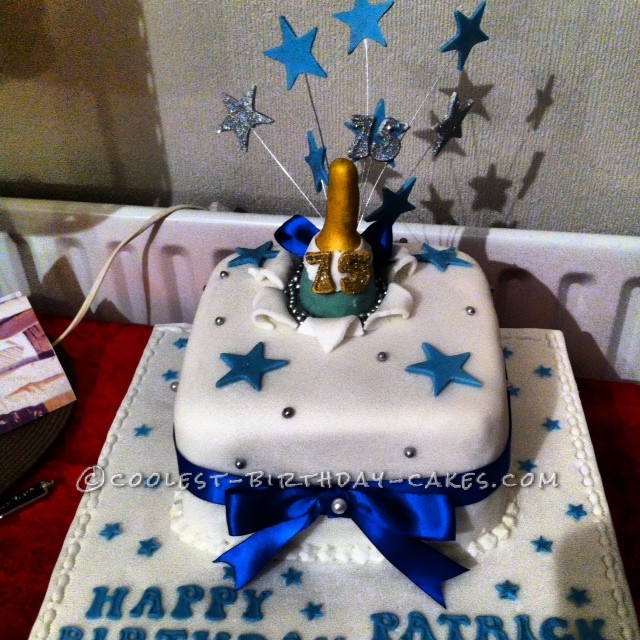 I was asked by my cousin to make this cake for her father in law. She decided she wanted a champagne bottle bursting out the center of the cake. I started my making the stars on wires, some in blue and some in white. The white ones will be covered in edible glitter when dried out. I  also made a champagne bottle … Read more