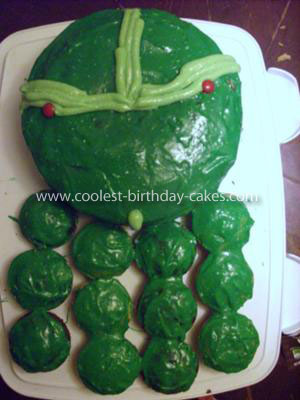 My husband is a huge Lovecraft fan and loves Cthulhu, so I decided to try and make him a Cthulhu from Lovecraft Cake for his 30th birthday. I made a classic, sour cream based, marble cake (which is like making 2 cakes, 1 chocolate and 1 yellow). I poured some of the yellow in one half of an eight inch round cake pan and some chocolate in the other half and swirled them around then I did this in a second eight inch round to make a layer cake body.

Then I used the rest of the batter to make 16 yellow and chocolate cupcakes for the tentacles. Cthluhu is supposed to be very squid-like, so four and four works very well. I made some cream cheese frosting since it’s white and easy to dye with food coloring and make mostly dark green frosting, setting a small bit aside to make the light green frosting. The eyes are red M&Ms and I used a cake decorating icing bag to shape out the brow.