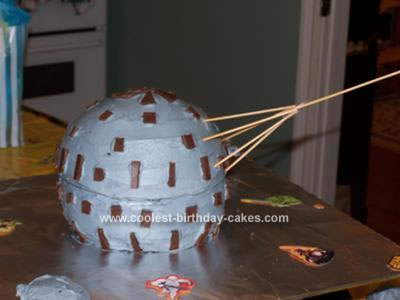 My son wanted to have a Star Wars party and couldn’t decide on a cake. I remembered that I owned one of the ice cream cake pan sets that allowed you to bake a cake and leave a space inside for filling. One of the pans made a perfect half circle (any perfectly rounded bowl that was oven safe would work as well).

I baked two half circle cakes using cake mixes (two boxes) from the store with an alternating flavor cake (one box) in the center space. I made cupcakes out of the leftover cake mix. I fitted these together with butter creme icing tinted a battleship gray. I simply used black food color paste sparingly to make the gray.

Once the two halves were together, I covered the entire cake with the gray icing. The spot where the two halves came together left a slight indentation which matched up to a similar indentation on the Death Star so I didn’t try to fill it in with icing and make the surface smooth at that location.

I then took Hershey’s milk chocolate bars and cut them into rectangles, squares and triangular shapes to make the various docking bays and openings in the death star.

Last but not least, I cut 4 wooden skewers in half and arranged the pieces in circle with the ends coming together. I placed one skewer piece in the center of these ends and simply taped them together with clear tape to make the Death Ray. I place the cake on a riser covered with dark blue napkins to make it look as if it was floating.

The cupcakes I made out of the leftover cake mix I placed all around the Death Star to look like little planets or asteroids. The cake was a big hit and once we started to cut into it, the bottom half collapsed and it really looked as if the rebel alliance had exploded the Death Star.