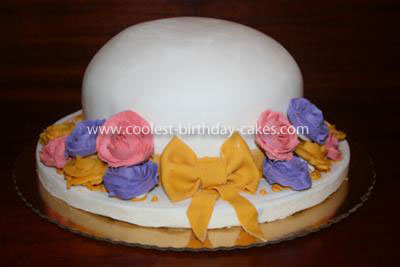 This is a Derby Hat Cake that I made for a friend who requested a cake for his mother’s 65th birthday party. She enjoys the races, and her party was in the middle of the derbies. I decided to go with a derby hat.

The cake itself is chocolate with white buttercream layers. I used an 8″ round cake pan, which I crumb coated, refrigerated, and carved into a rounded shape. The exterior is white buttercream covered in marshmallow fondant. This was my first attempt at a bow. That was MMF also. The roses were made from almond buttercream.

The brim of the hat is simply the cake board covered in fondant. It is a 1/2″ thick circle. I used royal icing to pipe in some decorative edging on the hat’s brim. The cake was a little small for the party so instead of making it larger (I thought it would have lost some of the cuteness). I offset it with cupcakes with a smooth frosting and a buttercream rose on top, matching the roses on cake.

The party a success and so was the cake.