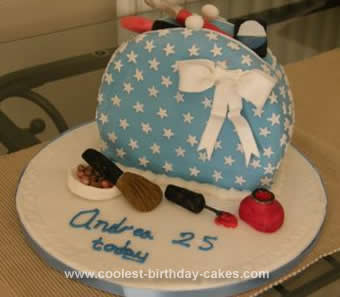 I started this Homemade Purse Cake by making a 8” coconut Madeira cake. I made this a few days prior to icing the cake.

I then started to make the make up items. I made these with a small amount of roll out icing and a small amount of flower paste. I kneaded this well, this is better with the two mixed because you can mould it easier and it dries hard.

To make the eye shadow I rolled out some of the icing and cut out a square I then cut out a circle and then cut the circle in half for the eye shadow and stuck this to the square I had cut, using a little water. To make the lipstick I rolled out a small piece of icing into a sausage shape and moulded it into the shape of a lipstick making sure I shaped the edge of the lipstick, using a moulding tool I marked where the lid ended for a bit of definition. I rolled out a sausage shape for the lip-gloss and moulded this into the shape of one of my lip glosses.

To make the nail polish I moulded some icing into the shape of the bottle making a slight hole in the top where the brush would go and set this aside to dry out. For the brush I had to use a cocktail stick I moulded a handle and wet the stick slightly before inserting into the lid and then I made the bristles for the brush, when it was dry I painted part of the brush black and the tip of the brush red like the colour of the polish. I also mixed a little royal icing in red and drizzled it on some wax paper to dry to assemble on the cake to give the effect of dripping nail polish.

When all the above items were dry I coloured with colour paste that had been watered down slightly and added some shimmer where I thought needed it.

I made a little white dish for the bronzing balls.

For the bronzing balls I coloured a small amount of icing half in brown the other in brown/pink, I then rolled out little balls in the same size and dusted these with shimmer dust.

To make the bow I cut out 1 long strip and 2 shorter ones for the tail of the bow. With the long strip I decided how big I wanted the bow and folded the two ends in wards sticking these together with a little water. I screwed up a little bit of cling film and placed it in between the loops of the bow so it will dry open. I then added the tails to the bow making a slight ruffle in it when lay flat and cut a v shape out of each. This is how it will dry.

I covered a 12” cake drum with white roll out icing and made small heart impressions all around the edge then set this aside to harden. I then mixed some butter cream using I slab of unsalted butter and icing sugar.

With my 8” cake I cut a piece off the edge of the cake so I could stand it on it’s side. I then sliced the cake into three pieces lengthwise and filled one part with butter cream and the other with jam. I then placed on its side on a baking tray and cut a small v out of the top as if the purse was open, it was then covered all over in butter cream and placed in the fridge for about 1 hour to set.

Meanwhile I cut a small piece of white roll out icing of a 1kg pack to cut out all the stars these would then harden slightly ready for the cake. I then coloured the rest of the icing baby blue with colour paste.

When the cake was set I rolled out the blue icing so it was big enough to cover the cake. Carefully placing over the cake I made sure the top indent was covered first in case I tore the icing then smoothed over the cake and cut off any excess icing, then with a pallet knife I transferred the cake to the cake drum and piped with royal icing all around the base of the cake and piped around the top of the purse for definition and added two balls of icing for the clips of the purse. I then started to stick on the stars with a little water.

I placed eye shadow, lipstick and lip-gloss inside the top of the cake with a little bit of icing to stick them down. The nail polish was on the board. I decided where I wanted the brush but before sticking down I placed the drizzled red icing on first then stuck the brush on. Then I placed the bronzing balls on the base and attached the brush. Then very carefully I attached the bow to the cake, then I wrote a message on the cake.

My daughter in law loved it. 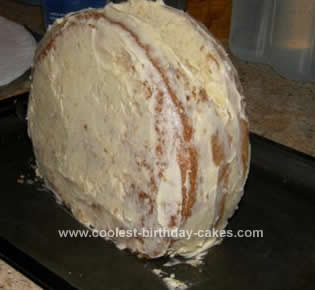 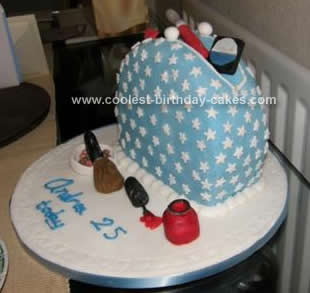 Cool Homemade Coach Purse Cake for my Mother in Law