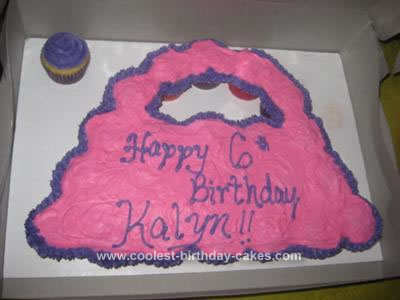 The theme of my daughter’s 6th birthday was All Things Girly so it was only fitting to do a purse cake. When I finished making the batter, which was a simple 4 egg yellow cake batter, she asked me for cupcakes instead of a cake. I agreed but was still stuck with the purse idea in my head.

While the cupcakes were baking, I made butter cream icing. I separated 1 cup and tinted it with royal purple color and the remaining icing I tinted with rose pink color. Once the cupcakes were finished I positioned them into a square purse first but didn’t have enough room on the board for the handle. I then rearranged the cupcakes by making 3 rows for the bag part of the purse (7 on the bottom, 6 in the middle, 5 on the top) and 5 cupcakes curved and formed the handle; the remaining cupcake (in the top left) was for her candles. A trick to keeping the cupcakes in place is to put a penny size dot of icing on the bottom of the cupcake before placing it on the board.

Using tip #789 I iced each row, dipped my angled spatula in hot water and began to spread the icing just as I would if I were icing a cake. Icing the handle of the cake took a little longer and required more work since it was curved. To cut down on time and regain the feeling in my arm, I used wide round tip #2A and dropped pink icing globs on the cupcakes that formed the handle, this made it easier to spread. Using tip #22 I dropped stars around the outside of the cupcakes, doing this covered up any areas of the cupcake that weren’t covered with the pink icing.

I finished the purse by writing happy 6th birthday Kalyn with tip #4.

Cool Homemade Coach Purse Cake for my Mother in Law