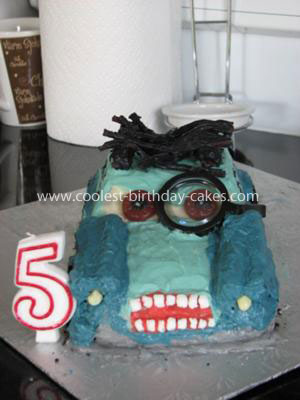 My son is crazy about the Cars movies. He has already had cakes or most of the cars characters from the 1st movie and he had his heart set on a character from the new movie (even though it wasn’t even out yet). He had read a few stories about Cars 2 and really liked the bad character named Professor Z. So I agreed that I would do my best to create a Professor Z Cars 2 Birthday Cake. I looked on this site to see if I could find a way to start but had no luck so I had to start from scratch.

I bought the Wilton cake pan of the “3D car cruiser”. I used one cake mix to fill it and baked it according to directions on the pan. I baked it earlier in the day and let it cool. I used the Wilton icing colours of teal, and black and mixed them into a family icing recipe. I iced the cake with white icing first and let it harden. Then I used the teal to make a light green/blue colour for the base of the car but left a white space for the windshield. I mixed up a small amount of teal and black to create a darker green/blue for the fenders and side part of the car. I used the black icing to colour in the windows on the sides and the back windshield.

I gathered a variety of candies to help create the accessories on the car. Professor Z has large fenders, a broken rack on the top of his car, and a mouthful of teeth. I used Oreo sippers to create the fenders. They come in a package of 2 and I cut each stick in half. I coated the Oreo sippers with icing and iced them onto the front of the car. I cut out the spaces where the wheels were and replaced the cake parts with an Oreo cakester cookie to make it look like real wheels. I used yellow jelly beans to make the headlights on the front. I used yellow and orange jelly beans to make the headlights in the back. I used the black to make grey and used it to make the front and back bumpers. I used pull and peel licorice and coated it with black icing to make the roof rack/hair. I pulled some apart and left some whole. I used mini marshmallows cut into small pieces for the rows of teeth. I used gummy lifesavers for the eyes and put white and black icing inside the lifesavers to finish the eyes. I found some nerd type glasses at the dollar store and broke them in half. I filed the broken part smooth and bent the arm so it would wrap around the side of the cake.

The cake turned out OK and my son Noah was thrilled. Once we actually saw the movie, he liked the cake even more. He was so excited that he got to eat the bad guy from the Cars 2 movie. I don’t know what he will ask for next year but hopefully I will be up for the challenge. 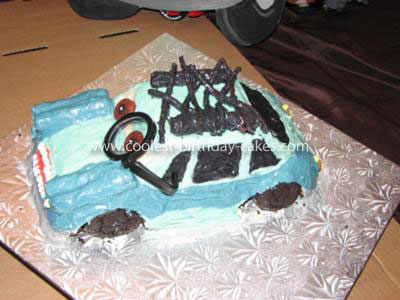 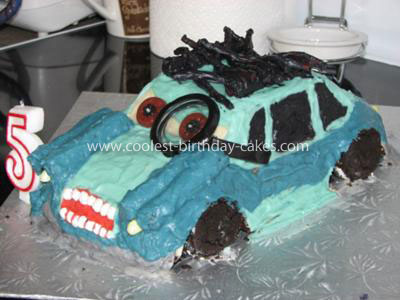 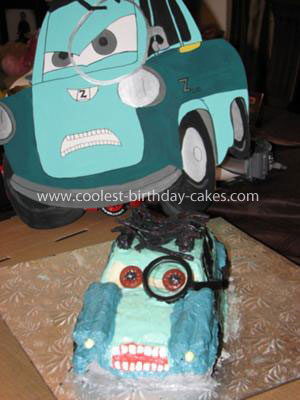