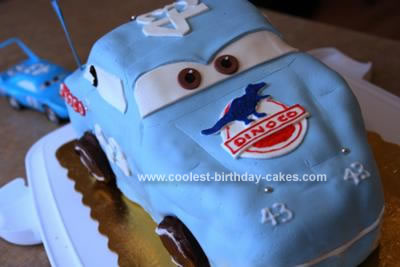 This Disney Cars The King Birthday Cake is a cake that I made for my son’s 4th birthday. It is his favorite Disney Car, The King. It’s my second attempt at fondant! Scary but not impossible. It’s also proof that you don’t need any special pans to bake a “Cars” cake!

I started by baking two 9×13 yellow butter cakes. I stacked them together with a little vanilla buttercream in between. I then trimmed the long side (to make the car narrower) and took the cut off piece and placed it on top for the car’s head/eyes.

Next, I carved the cake freehand into the shape of the King, working with one of his toys as my model. Don’t forget to carve out wheel wells for the tires. I brushed off the crumbs, and then covered the whole thing with more buttercream and put it in the fridge to set up while I tinted and rolled store-bought white fondant (1 pound, bought at local cake decorating shop).

I then placed the rolled out blue fondant on the cake and smoothed it with my hands. I then detailed the car with more fondant pieces and tinted Royal Icing. I painted the fondant dinosaur logo with white and dark blue royal icing. It was also easier to do the letter with royal icing vs. fondant.

Next, I added chocolate covered Oreos for tires. Lastly, I cut out a spoiler from laminated cardboard (actually from a laminated gift bag) and taped all of the open ends with clear tape (to avoid spoiling the paper). Cut slits for the spoiler and tadah! I made it the night before the party and it held up just fine! All in all, it took approx. 3 hours to decorate, but totally worth it!