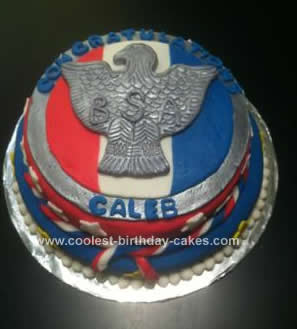 My son finally received his Eagle Scout rank (yay!) and as part of his Court of Honor, I wanted to celebrate with an Eagle Scout Court of Honor Cake. This cake is a 2 layer, coconut rum cake covered in marshmallow fondant. The bottom layer is decorated with the gold scout fleur de lis which I cut out of fondant with a cookie cutter. The second layer is reminiscent of a flag with stars and the red/white/blue color scheme. The top of the cake signifies the Eagle badge that he received.

I hand-molded the Eagle out of fondant and made the markings with a toothpick, then brushed the whole eagle in silver cake dust. For the rope around the top layer, I laid very thick ropes of red, white and blue fondant next to each other and rolled them together like a snake until it was the thickness I desired. I think the rope was the hardest part for me to figure out, it took a few tries to get a technique that worked without the fondant breaking!