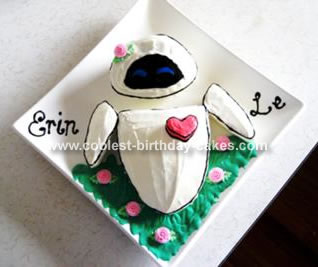 Erin is currently obsessed with the Disney movie Wall-E and loves Eve the most. I’m her nanny so I made Eve from Wall E cake as a little surprise for her birthday. She loved it so much she refused to eat Eve’s head, which is still in her fridge a month later!

I used one Betty Crocker Vanilla cake mix which I made following directions and baked in a rectangular loaf tin (Before baking I made it a rainbow cake by putting food coloring drops on top of the mix and then swirling it through with a butter knife). While it cooled I printed a coloring in picture off the internet. Cut it out, then lay it on the cake and chopped away. Cut a little heart to put on top.

Used 1 tub of Betty Crocker Vanilla icing to ice. Colored icing with black food coloring for the face, blue for the eyes, red for the heart and green for the grass. I iced individual pieces separately on cutting boards then lifted with egg flip and positioned on serving platter. I spooned the green icing into a ziplock bag, snipped off the end and squeezed around Eve’s lower half.

For the finishing touches I added black outline using edible gel and decorated with 6 sugar flowers. When it came time for candles we stuck them on Eve’s arms. Kids were delighted when we cut Eve and discovered she had “rainbow guts”. I had trouble with the edible gel at first but when i stopped trying to be perfect and did it faster it became much easier.

I was very happy with Erin’s big smile on receiving it.