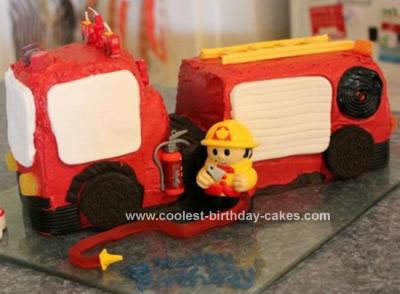 My little boy is Fireman Sam obsessed so I wanted to make him a fire engine birthday cake.

Saw one in a Woman’s Weekly (Australian Publication) cake book and then went on line and did some searching (that’s how I found this site) and had a look at others. Found the Betty Crocker how to video on You Tube and then used all of that info to come up with my own cake.

It is iced with butter cream/Vienna cream icing. Discovered that making really red icing is not as easy as it sounds! Thank goodness for Google! After much red food colouring found out adding some blue was the only way to make my pink icing red (who wants a pink fire engine!)

Used Oreo cookies for the wheels, licorice ropes for the hoses, licorice straps for bumpers and jelly lollies/jubes for the lights. The ladder is made with yellow musk sticks. The windows and doors I made with with white icing (bought from the supermarket in a box and then rolled it out flat and cut desired shapes.)

I found the little candles (fire engines, hydrant and hats, I cut the wicks off the hats) at local supermarket. The fire man was a toy (Mega blocks) and his hose was made from a lolly rope with a toy witches hat for the nozzle. I used blue writing icing to write the message.

I piped brown chocolate icing (wanted to do grey but could not find black colouring anywhere) over the front wheels and along the sides and in the bit between the cab and back.

If I had more time (was up til midnight decorating) I would have cut small circles for the hub caps and made a number plate as well but just ran out of time.

For my very first attempt I was very proud of my efforts and most importantly my son loved it! 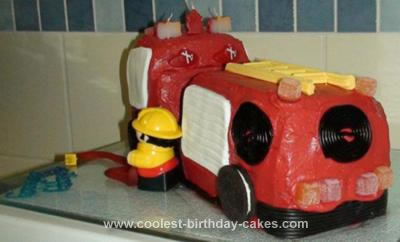 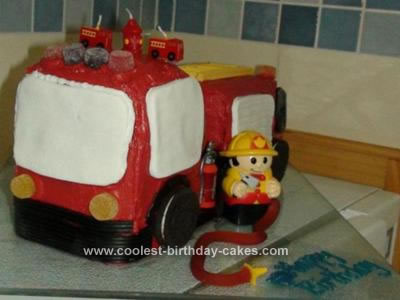 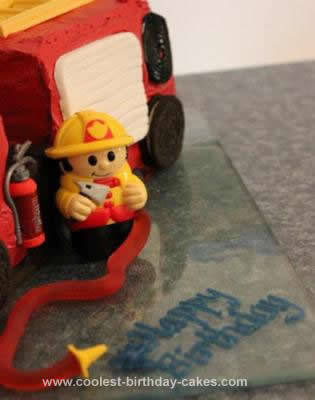