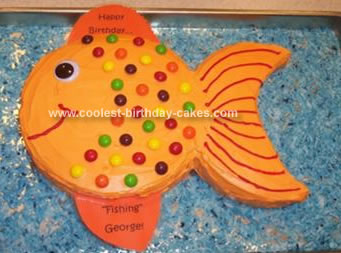 This fish cake was made for my uncle who loves to fish and who my children named “Fishing George” instead of Great Uncle George. I used a cake mix and made 2- 8″ cakes. I cut a small curve off of one cake to make the tail fit better. I then cut the tail and attached with icing.

I did not need a very large cake, so instead of using the rest of the discarded tail portion for the fins, I used my computer to write the message on card stock and laminated it before sliding it into the cake.

I used a large googly eye and Skittles to decorate the fish. In order to keep my silver pan from shining for pictures, I used blue food coloring and made blue coconut to represent water. The mouth and tail markings were made using my decorating tip and bag.

It is much easier to freeze the cakes before carving them. Also, briefly refreeze before icing the cakes to prevent crumbs from appearing where you don’t want them!