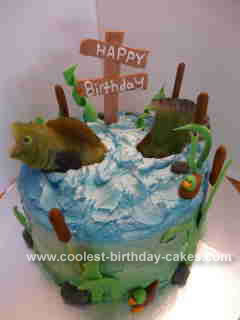 My ten year old son is an avid fisherman. I had to make just the right cake for his birthday. I knew I wanted to do some kind of “fish out of the cake” idea… but it took a couple of (secret) attempts. I had make a few cakes before, but I had not sculpted any thing out of fondant before.

The fish, a bass, looked like a worm the first few times! But adding gills and lips did the trick. I started with a basic 2 layer cake iced with buttercream. Then used food coloring air brush to spray on the “pond” and the fish. I made the cattails out of fondant pressed on spaghetti sticks (don’t apply until ready to serve, butter cream will soften). The grass blades and sign were also make from fondant ahead of time and allowed to dry.

My son loved his fishing birthday cake. We had his birthday at a pizza parlor and I had several people wanting to know where I bought it from! Good feeling! Hope you like it too.