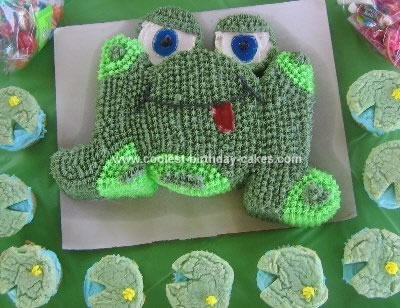 I made this Frog Cake and Lillypad Cupcakes for my nephew’s first birthday last spring. His mother wanted a frog themed party and a cake to match, but also wanted him to be able to have an individual cake to get messy with. I came up with the idea for this cake by combining several cakes off of this site.

I started with a 6 inch round cake and a 9X13 cake. I also made 24 cupcakes. I used the round cake for the center of the frog’s body and cut the legs out of the 9X13. I glued them together with homemade buttercream icing tinted dark green. I then used two of the cupcakes and peeled off the paper cups to glue them onto the top for the eyes. I used a star tip and covered the entire frog with the dark green icing leaving areas at the bottom of the belly, feet, and tops of legs for the light green icing also made out of buttercream.

I used some white buttercream for the eyes and blue gel icing for the iris. I then continued the star technique and dark icing to make eyelids on the tops of the eyes. I continued the stars on the sides of the cake as well, following the icing colors. I came back with black buttercream and piped the pupils and smile. I used a cherry fruit rollup to cut out the tongue.

For the cupcakes I wanted to do something a little different, but with the same theme. I used an idea I found on the site for the lilly pad cookies. I used refrigerated sugar cookie dough and green food coloring. I baked them whole and before they cooled, I came back and cut out the notch with a serrated knife. I then used yellow buttercream and a flower tip to create the flower on top.

I tinted more buttercream blue to look like water and the set the cookie on top to look like they were floating. To display, I simply placed the cupcakes around the frog in the center.

Everyone at the party enjoyed the cupcakes and my nephew had a blast digging into the frog. My sister in law was so impressed that she wants me to make his cake every year.