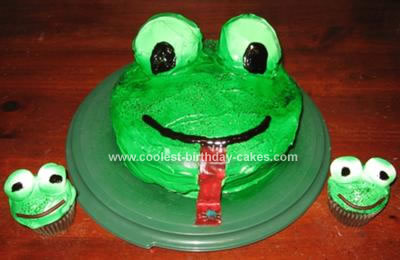 I made the larger cake with two 8 inch round cakes layered. The frosting is tinted green, but I also sprayed it evenly with the spray coloring. I added green sugar sprinkle crystals to give it texture.

The eyes are cupcakes sat on sideways with a bit cut off so they sit well. The black inside the eyes is black gel. The “whites” of the eyes were covered by a piece of paper when I sprayed the green coloring. Technically the whites are still tinted green like the frosting, but they are much lighter than the rest of the cake because I covered them with the paper while spraying. It was easier than trying to frost them white. The tongue is a red fruit roll.

The fly on the tongue is made from a raisin with blue rolled fruit wings which I trimmed with scissors on top and chocolate sprinkle legs (the kind that looks like little sticks).

I did the icing the same way on the cupcakes as I did on the large cake (tinted green, coloring spray, green sugar sprinkles). The eyes are the larger marshmallows cut in half. I used green food coloring spray because I knew it would be too difficult to frost the top/backs of the eyes.

I covered the whites of the eyes with paper circles before spraying. The mouths are pull and peel fruit strings. 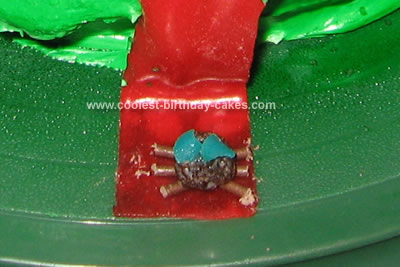