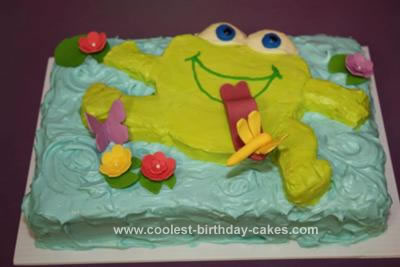 I made this Frog Birthday Cake for my daughter’s 4th birthday. I was inspired by a combination of other cakes on Coolest-birthday-cakes. I wanted to make the frog look similar to a giant frog balloon we ordered for her party, so that’s where I actually came up with the frog’s “look”.

The actual frog is a sheet cake cut into somewhat of a triangle with rounded edges for the body and also the legs and arms are cut from the same sheet cake as the body and pieced together on top of the cake. The eyes are 2 mini cupcakes with white icing. I dipped my knife in milk several times as I iced the frog and the eyes, to smooth it out and give the frog a “wet” look.

The bottom layer is just a quarter sheet cake iced with a homemade mock whipped icing I also found on the internet. I made it look wavy and put swirls around the frog’s arms and feet to make it look like she was swimming in a pond, also adding lillypads, a butterfly and dragonfly made out of a combination of gum paste and fondant. The eyes are just piped big blue dots for the eye color & a smaller black dot for the pupil.

My husband came up with the idea for the tongue, which I think turned out super cute and added something unique to the cake! The tongue is made out of fondant I cut and dried into that wavy shape and used sugar/water mixed into paste to attach the dragonfly to the tongue and let it dry for several hours before attaching it to the frog.

The cake was a big hit! 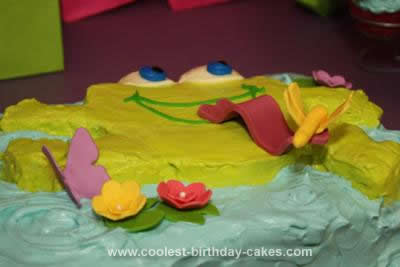