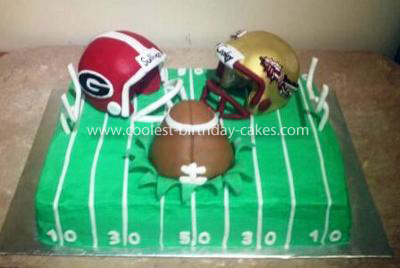 This Homemade GA vs. FSU Football Birthday Cake was made for a birthday party for 2 friends, one a GA Bulldog fan and the other FSU Seminoles fan.

I made an 11×15 yellow cake cut in half filled and frosted with homemade buttercream colored green for the field. I cut strips for the lines out of MMF with a pizza cutter, and the numbers were also MMF cut with little fondant cutters. The goal posts I used gumpaste, shaped and set over night. The helmets I shaped rice krispie treats covered in MMF and used Duff’s Cake Graffiti spray in red and gold, the masks were gumpaste and the logos were gumpaste and free hand painted with Wilton’s icing color(mixed with a little clear vanilla). I also used gumpaste for the name plates on the front of the helmet. The football was also shaped with rice krispie treats covered in MMF colored brown. I used some green MMF and cut out triangles to place around the football (painted a little water on the back and “glued” it to the football) to give it the effect of busting out of the cake.

I had so much fun making this cake, and besides a few flaws it came out great and they loved it!