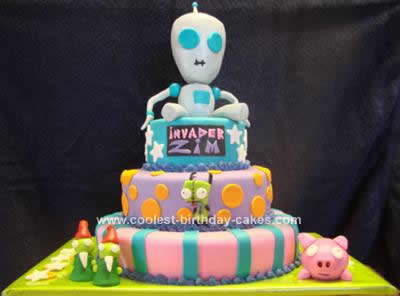 I made this Gir from Invader Zim Cake Design for my niece Sabrina’s 16th birthday. The cake is marshmallow fondant with buttercream piping. Gir is in his original form as the cake topper made out of rice krispie treats covered in MMF. Gir in his “dog costume” is on the 2nd tier made out of MMF.

It was a little difficult placing each tiny piece on the cake. I painted on the stitching with wilton food color gel diluted with tequila. The piggie is all fonfant which I don’t recommend because it was too heavy and it wouldn’t stay round but it worked out in the end. I tried making it with the rice krispie treats but it was my first attempt at sculpting the Rice Kripsie treats and didn’t go to well but the robot Gir worked out great.

The whole cake is edible except the arms of the robot which are held together by 12 gauge flower wire.