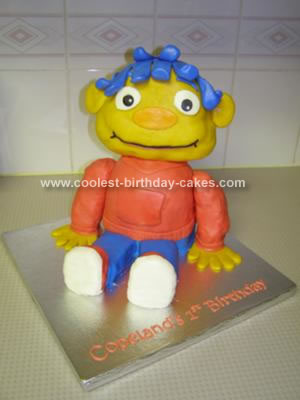 This was my first attempt at a 3-D character cake. I received an order for a homemade Sid the Science Kid cake. I had never heard of this PBS show and had to Google it. I started with 3 layers of 6” round cakes, which I carved to make his torso (his neck down to his butt). I made a small square cake from which I carved his legs and feet.

I wrapped a thick strip of blue MMF (marshmallow fondant) around the bottom of the torso for the upper part of his pants. I covered the rest of the torso in red MMF, adding a strip along the bottom and marking it with a veining tool for the hem of his shirt. I added a fondant pocket and neckline.

The head and arms are made of RKT (Rice Krispie treats). A tip I learned when molding something out of RKT – do it while it is still warm as it’s much easier to shape. I covered those with a thin layer of buttercream and then MMF.

I covered the legs in blue fondant and the feet in red and white fondant.

For the hair I mixed a bit of tylose powder into some blue fondant to make it more firm. I attached pieces to his head with royal glue. Oh, and he has fondant eyebrows somewhere under there too! I was a little worried if he would stay upright for the 45 min. drive the customer had to make so I placed 2 skewers vertically into the board behind him so he could rest back on them.

I thought it turned out pretty good – the customer actually did a little dance when she saw it and paid me 20% more than what I quoted her!