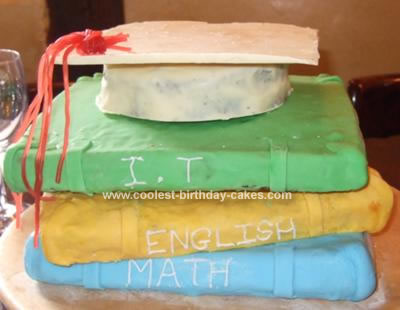 I was asked to make a cake for my brother in law’s graduation meal. I looked on the web and in books for some ideas for a graduation cake. I decided to make the cake into pile of books and put a mortorboard on the top.

To start I made three rectangle cakes, one chocolate, one lemon and one sponge. I also made an additional chocolate cake to use for the hat(it doesn’t matter what shape as you cut the correct size later). Using pre-made icing, which I coloured blue for the first book, I covered the chocolate rectangle cake. For the edges of the book I cut and rolled small piece of icing.

For the second book I used yellow icing and for the third I used green. I made each book separately and then used jam to make the books stick together. I decided to place the books at different angles to give it a better effect. I then used a white icing pen to write the subjects onto the books.

For the Mortorboard I used a small saucer as a template. I cut the template again using grease proof paper, placed the template on the extra cake and cut around using a sharp knife. Although usually black, my brother in law loves white chocolate, so I decided to make it more personal to him. I melted 2 bars of white chocolate in a glass bowl over boiling water. I briefly heated the icing knife over the steam so the chocolate didn’t harden too quickly. I poured the chocolate over the cake and using a icing knife spread the chocolate so it completely covered the whole circle of cake.

Using a heated knife I carefully cut out a square, slightly bigger than the circle. Using a little melted chocolate I placed the square onto the circle and then using the chocolate again placed it onto the top of the books. To complete I used red shoe lace tied together to make the hat tassels and used the last of the chocolate to attach it to the hat.

It took about 5 hours to complete, but I think it was worth it!