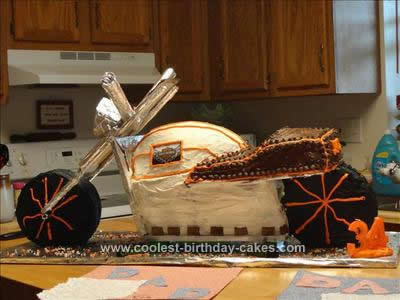 My brother’ girlfriend wanted to make a Harley Birthday Cake for his 34th birthday. She found a picture of a cake she liked on the internet and me, her, and the children worked together as a family to make a cake made from love that would be as special to my brother as he is to us.

We used 7-9×5 cakes flavored vanilla, red velvet, chocolate, strawberry, carrot, spiced, and cherry. The red velvet, vanilla, carrot, and spiced cakes were homemade, but the cherry and strawberry cakes fell apart so we had to resort to Betty Crocker mixes for a rescue. We made the icing using powdered sugar, egg whites, real butter, and vanilla extract. The handle bars and chrome were made from tin foil.

We stacked the cakes on a homemade wooden stand made with 2 pieces of plywood cut 1- 9×5 and 1- 7×5. We nailed them together to form a 90-95 degree angle. The rice krispy tires were place in the front and rear of the stand. We stacked 5 cakes on top of each other and then placed a piece of cardboard cut to fit over half the stacked cakes and over the back tire, in order support the weight of the remaining two cakes which were cut in half and separated to give the look of a bike seat.

We then shaped a gas tank out of rice krispy treats and placed over top of the other side of the cake opposite the seat. After cake was assembled we iced with the home made icing. For the bike seat we melted chocolate chips and applied with butter kine and spoon and then trimmed in remaining chocolate chips. We did not have black food coloring so we mixed green, orange, blue, and whatever else food colorings we could find to get a dark color for the wheels and iced them.

I have to say this was the funniest cake I have ever helped make and the look on my brother’s face was priceless. After posting pics to family and friends we have 2 more of these cakes to make in the next month.