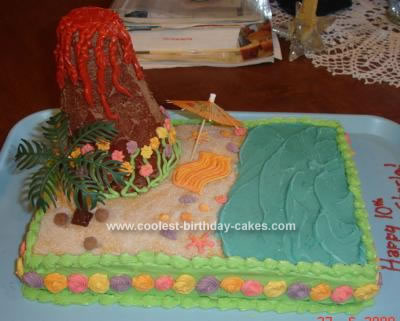 First, 5 days before the party, I made royal icing flowers, large (for the lei around the cake) and small(for the volcano vine), a beach towel, and some seashells (I made them up as I went). The colors were pink, orange, yellow and purple. Then I let them dry for a day or so and put them in an airtight container (these also make cute candies for party favors).

Then two days before the party I made a 9×13 and one 9-inch round. They went in the refrigerator overnight.

The day before the party I made the buttercream icing and tinted it lime green, cocoa, ocean blue and light tan. I put a crumb coat on the 9×13 (using the appropriate color for each section) and assembled the volcano.

I did this by tracing the cake pan onto paper (I used a brown paper bag), then using 4 cups of graduated sizes, I fit them all inside the circle and traced them. These would serve as my pattern for making graduated cake circles to stack. Kind of like a mini tiered cake. Once I stacked them with icing in between, I put a dowel down the middle of it, and I carved the sides so that they sloped off like a mountain. Then I coated it with the cocoa buttercream, and sprinkled the wet icing with cocoa powder from a sifter. Back in the refrigerator with both.

That evening, I put the final coat of icing on the 9×13. Green on the sides, tan of the beach half, and blue on the ocean half. For sand I used Domino organic cane sugar. Once the 9×13 was iced, I put the volcano on. Made shell border in green, and colored some buttercream for the lava. Back in the fridge.

The morning of the party, I added the royal icing decorations. I waited until the last minute, because they will soften. I had reserved some green icing for the vine on the volcano and to attach the flowers on the side.

The palm tree came from a Lego set and the umbrella came from the drink section at the store. I placed a few of the shells around and the coconuts were a last minute idea. All I did was make a blob of icing and roll it in cocoa powder.

The additional challenge to this cake was that it was totally gluten-free. I used a gluten-free cake mix and triple checked all my ingredients, either with the mom or on the internet. McCormick food dyes and vanilla are safe. Royal icing and buttercream are safe. Some sugars are not, so be careful.

This Hawaiian Luau Birthday Cake was such fun to make! Hope it gives some good ideas! 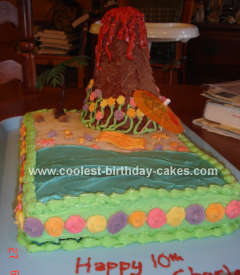 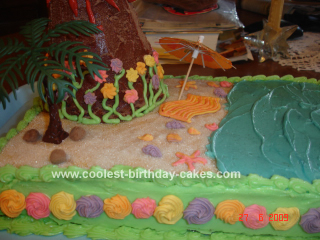 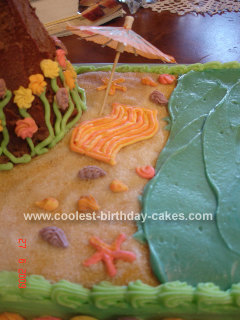