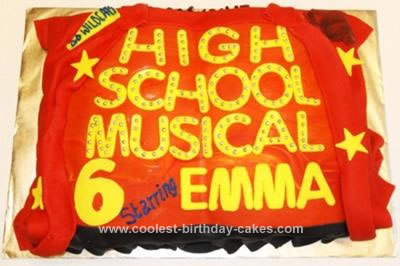 Looking back, if I had known the work that would be going into this homemade High School Musical birthday cake, I’m not sure I would have even started it! I made this cake for the daughter of a good friend for her sixth birthday. The cake itself was red velvet with cream cheese filling which I made using the large Wilton “open book” cake pan mold. This was my first time making red velvet cake and it turned out really well (I made cupcakes from the leftover batter and frosting!)

I used buttercream icing to crumb-coat the cake and then covered it in a red-swirl pattern fondant for the background. However, the fondant didn’t quite cover the whole cake, so I had to get inventive. That is when I decided to add red fondant drapes and valance as well as a black pleated skirt along the pattern, all to give the impression of a stage setting.

Then I moved on to the lettering. Now, I understand it’s not the HSM “font” but I had alphabet cookie cutters and it was less labor-intensive than cutting out the letters individually, by hand. After placing the letters, I added the little silver edible balls. The number “6” I did cut out by hand and I wrote “starring” in blue Wilton decorator’s icing.

Finally were the decorative accents, some of which you can’t see well. On the left is the megaphone with “Go Wildcats” lettering, on the right is the wildcat silhouette in red/black marbled fondant, yellow fondant stars and on the top side of the cake is actually the popular silhouette of the six HSM kids. I actually did this using HSM stickers, cutting out each individual character and sticking them to the cake in the order that they appear in all the promo material. These were also done in the red/black marbled fondant.

This was actually only my third time working with fondant so I was very happy with the final result.