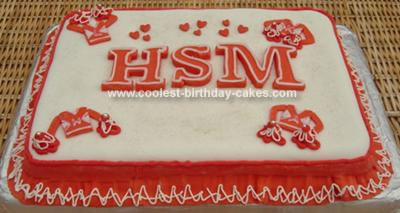 I made this High School Musical cake for 4 little girls. To start, I made a large chocolate sheet cake from scratch and then covered it in a chocolate buttercream icing. I then froze the cake to make it easier to work with. I used ivory fondant icing (sugarpaste) to cover the cake.

Then I cut out the HSM letters from red fondant and also the cheerleader shirts. I made a shirt for each girl and put the arms and pom-poms in different positions. I tried making the pom-poms from extruded red and white icing but they became too brittle to work with so I iced them on instead using red and white buttercream icing.

I iced the detail on the shirts and the HSM letters with a tube of white writing icing, and put each girl’s initial on a shirt. To make the cheerleader skirt, I first rolled some white fondant in to thin sausages and put this around the base of the cake (to give the skirt some kick).

To make the skirt I cut strips of red fondant and using a frilling tool, I rolled it back and forth over the fondant to make the frills (you could use a toothpick). I then attached the skirt to the cake using a little water.