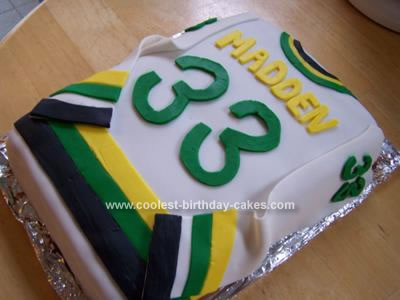 My son’s 6th birthday ‘party’ is also the end of year hockey gathering for his team at our house. I wanted to make a Hockey Jersey Cake that resembled his hockey jersey for the party.

I started with the basic chocolate cake recipe in the America’s Test Kitchen cookbook- making it more dense by sifting the dry ingredients several times but otherwise following the directions exactly to make a 9×13 sheet cake. I cheated on the chocolate buttercream filling by whipping together a store-bought milk chocolate and a buttercream frosting (delicious!) but you could make your own.

Once the cake was cool, I cut it into two slabs, slathered the filling, layered the slabs and frosted the outside of the cake with the chocolate buttercream. I rolled out Wilton white fondant (with almond extract) and laid it over the cake, folding and pressing the corners and under the cake, using the small package (which covers an 8″ round according to the package)- I did it thin enough to cover the whole cake, but barely. I had enough though to make the sleeves with no waste, setting a little aside for black stripes too.

To make the sleeves I split the remaining fondant, then rolled it and trimmed it to look like sleeves (rounded on one end, cut at an angle on the other). I bought primary color fondant (again, Wilton- the small package for decorative touches) and rolled/cut the numbers, neck line and jersey/sleeve stripes from the yellow and green. Brushed and laid them on the sleeves and main cake. I mixed a lot of black gel coloring into a little reserved white fondant and rolled/cut out and glued the black stripes (I would recommend buying the black premade- this was messy)! Brushed and laid the sleeves to look folded and viola!