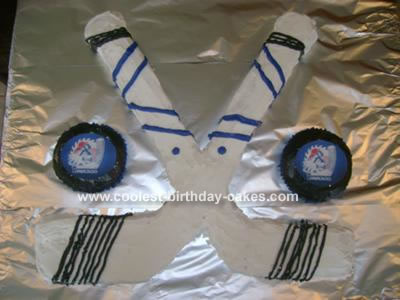 My son was really big into hockey last year, so of course he wanted a hockey cake. I didn’t think I could make the Maple Leafs logo so I made these two hockey sticks with two pucks.

I traced my son’s mini sticks (plastic mini hockey sticks) onto cardboard boxes and cut them out. I made 2 white cakes in 9×13 pans. I wasn’t sure how much cake I would need so I made extra round cakes and made them into pucks. After cutting them out of cardboard I placed them on top of the cooked cakes and cut out the shapes (one cake made one hockey stick). Then I pieced them together like a puzzle until they made the picture shown. Leftover pieces of cake were then cut to fill some of the gaps. I called the local grocery store and asked them if I could buy royal blue, black and white icing which was really inexpensive and I didn’t have to experiment with colors.

For the details on this hockey sticks cake I used an icing bag and made the lines. I printed off my son’s hockey team’s logo and cut it to fit on the pucks. Before putting it on the pucks I put a small circle of plastic wrap so the icing wouldn’t leak through to the paper. All the boys loved it!