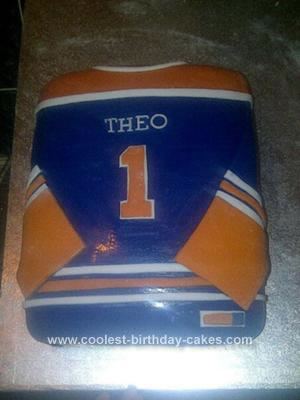 I live in Grimsby, England United Kingdom and hockey is just a big sport over here than everywhere else. I mainly do cakes for fun but my friend asked for one for her little boy’s 1st birthday (dad is a big big fan and player himself). She sent me a few photos of various jerseys they have and his dad is a big Gretzky fan so decided to use Edmonton Oilers colours.

I used a 13″ deep cake pan tin and used a basic chocolate devils cake recipe (enough for 4×9″ round pans) and made 2 layers. After they had cooled I used Good Housekeeping butter cream recipe and made enough to sandwich together the two layers and do a crumb coating on the top – left the cake in the fridge for half an hour and did a final butter cream on top.

I used M&B Luxury Sugarpaste ready to roll (otherwise known as fondant – I think lol) for the main jersey color – fitted it over the cake and cut around the bottom to neaten up. I then did the bottom 3 stripes (orange and white) followed by the sleeves. I then made the bottom of the sleeves using orange and then orange and white stripes. I then rolled out the orange for the top of the jersey fitted it on the top – pushed in position and cut around the bottom after it was put in place then followed by a thin stripe of white for the neck also.

I had to stencil the number 1 from an image on the computer but made 2 of these, one bigger than the original and placed in the middle of the cake and also one on each arm. After a fiddly half hour I finally got the name sorted – I know it’s only 3 letters but have never used these sugar paste letter cutters before and had to get the hang of it.

All the sugar paste was put onto the cake using just plain old water. I would of used edible glue but found this makes it hard and I wanted to keep the icing soft.

After everything was in place, I used water again just to brighten up the colors and give it a nice sheen.

My friend absolutely loves the cake, it’s just a shame her little lad is 1 otherwise I would have found out what he thought as well. Hope you all like it and just thought I would show you that us English people enjoy hockey just as much as you.