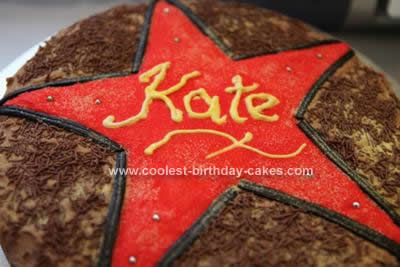 For her 21st birthday party my daughter was having a Hollywood party theme. She wanted a Homemade Hollywood Birthday Cake to complement this theme. A Hollywood star seemed both appropriate and suitable so using ideas from this site I set about the task.

A 30 cm chocolate mud cake was used as the cake for decoration and I sourced a 5 pointed star from clip art. I enlarged this on a copier so it fitted well on the top of the cake with the points of the star would be the edge of the cake.

To give the star definition I used a strap of straight licorice, cut into thin strips – this was placed along the edges around the star. Licorice was also added around the base of the cake just for definition and to make it ‘sit’ on the cake board ell.

On top of the chocolate icing I placed brown ‘sprinkles’ to give the finish some texture and interest. The cake was then dusted (through a fine sieve so they were evenly distributed) with yellow jelly crystals – to make the cake glitter.

Finally my daughters name and a couple of silver balls were added to each peak on the star.

Hint: I found it easier to spread icing with a hot knife so I stood the knives in a jug of hot water and rotated them throughout the task. 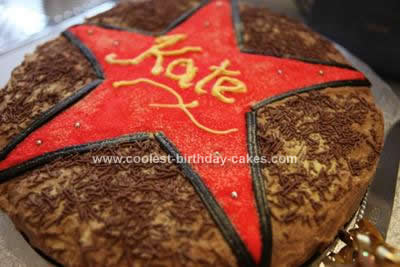