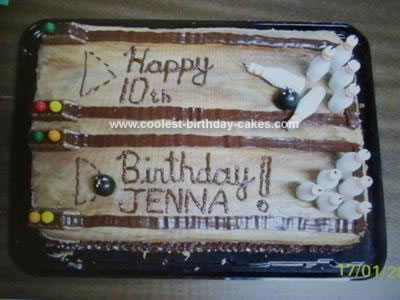 We recently had a small bowling party for our daughter, and this Homemade Bowling Birthday Cake was a hit!

We started with a 9×13 cake. For the frosting, I made a One Minute Caramel Frosting that I found a recipe for on the web. Once it completely cooled, I gently folded in about 2 tbsp. of store bought chocolate frosting and put it on the cake, making it as smooth as possible. This made the “wood grain” look of the lanes.

I then cut two snack-size ReeseStick candy bars in half at a 90-degree angle and placed them on the cake at one end to look like ball returns. I then used an upside-down rosette tip with chocolate frosting to pipe on the lanes from on top of the candy bar halves all the way down to the other end.

I placed Sixlets candy that I bought in the bulk candy section of the grocery store to use as the spare balls on the racks. I bought two sets of bowling pin candles, 6 pins and 1 ball in each set, at the grocery store across the road from the bowling lanes to set up in the lanes. Due to the limited space and number of candles I had, I made three rows with 1 in the first row, 2 in the second, and 3 in the third to make a pyramid.

Since my daughter was turning ten, I used a bowling ball candle that came with the candle set to “knock” two of the candles over. I then wrote on the cake with the chocolate frosting, and did a border around the base to make it look complete.

This cake is easy enough for an amateur decorator to make, didn’t cost a lot to make, and everyone was impressed at the party! Enjoy!