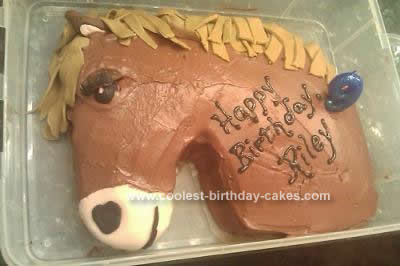 This Horse Birthday Cake Design I made for my daughter’s 9th birthday. She’s a Breyer horse fan! Never decorated a cake before but figured how hard could it be….well I was up till midnight making this “simple” one. I traced the bottom of the 9×13 cake pan on paper so I could make a stencil. I then made a vanilla cake recipe I found on the internet and, while it was cooking, made a drawing of a horse head on the paper stencil I had made.

Once I was happy with the drawing, I let the cake cool, then put the stencil on it and cut around it with a knife. I then removed the stencil and frosted the cake with homemade chocolate buttercream frosting. To make the nose portion (including the pink part), eye, eyelashes, eyelid, ear and mane, I used Wilton’s natural colors fondant (black, pink, tan and brown). Rolled them out thin and placed them on top of the frosting. The nose was the hardest to shape.

For the mane, I rolled out bigger sections and cut slices into it. I then overlayed those bigger sections onto the neck and messed up the sliced pieces to make it look like a messy windblown mane. For the eye, I built up a section of frosting then used a spoon to make an indention. I rolled black fondant into a ball, placed a tiny piece of pink on it to look like light reflecting on the eye, and put it in the eye “socket”. I then formed an eyelid from brown fondant.

I made fringy lashes out of a single flat piece of black fondant and mashed them into the eyelid. Placed the eyelid over the eye and there you have it.