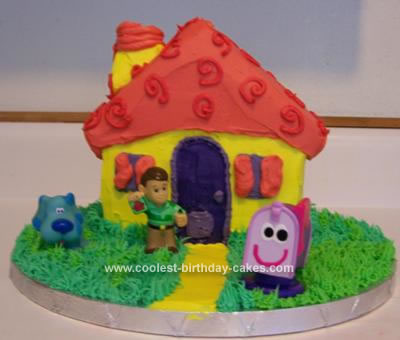 My son loves Blue’s Clues so I looked everywhere to try and find a cake pan of Blue herself. Having no success, I decided to do the next best thing and bake him a Blue’s House Birthday cake.

I used the house cake pan and then decorated the cake like the house in Blue’s Clues. I put my son’s toy figures of Steve and Blue on the cake board, in front of the house.

For the chimney, I built the icing up so as to get the illusion of bricks. I then drew on the door and windows with icing. I made the roof out of bright red icing and then lightened the icing color for the squiggles on Blue’s roof.