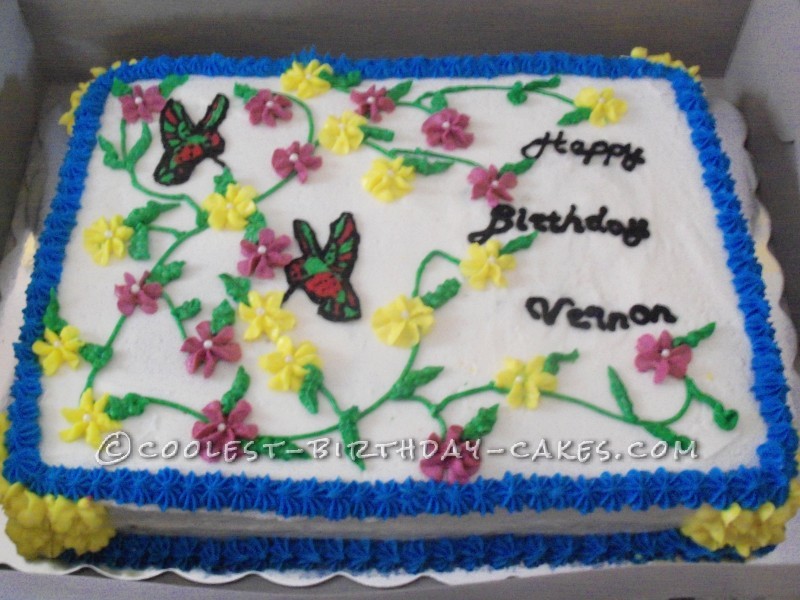 I made this Hummingbird Birthday cake for a friend’s dad who was turning 80. He enjoys spending his time bird watching and his favorite is hummingbirds. So the request was for flowers and hummingbirds. I kind of freaked out at first about the hummingbirds but I did my research and decided to do a frozen butter cream transfer for the hummingbirds and the words. I found a picture of the birds and printed it out in mirror image. I placed waxed paper over the paper and outlined the birds in black.  I put it in the freezer so that it could freeze.

Once it was frozen, I took it out and piped in the green and red color of the birds. I did the same thing for the words. I printed out the words on the computer in mirror image. Then I covered the paper in waxed paper and piped the words out (I am not very good with piping words so this was the next best thing). The words didn’t turn out perfect but they were much better than if I had tried to free hand it. I wish that I would have made them a bit big though.

I used yellow, green, and raspberry colored butter cream icing for the leaves and flowers that I had left over from another cake that I had made. I also used blue butter cream icing for the borders. This cake was white cake with a fresh raspberry filling. It was the first time I had ever filled a cake and was totally overwhelmed at the thought of it. But it turned out much better than I thought. I used fresh raspberries and sugar for the filling that I blended in my little food processor. I had a bit of trouble cutting the cake in half and getting it straight but it finally worked out.

My friend’s dad loved it and everyone said kudos to the chef.