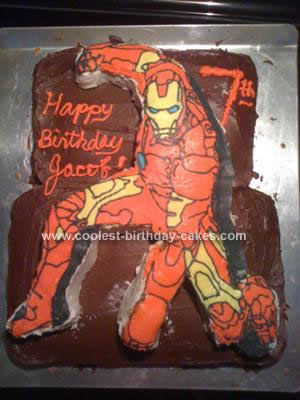 My 7 year old is absolutely infatuated with Iron Man. I decided to try to make him a one of a kind Iron Man Birthday Cake Design this year, so I started researching. I knew I wanted to do the whole body because almost all the research I did only had his head or head and upper body.

I found the image online. I used my printer to enlarge the image to the size I wanted. I then traced the image onto wax paper. I placed the wax paper over my baked and cooled rectangle cake, and then carved the cake out. I thought about doing fondant, but I had never used fondant before and a friend suggested not trying it with so many bends in the shape.

I found a method called Buttercream Transfer. I used that method to make the colored image. I placed the finished image over the carved out cake. The bottom layer was iced using store bought chocolate icing. I iced the wrong side of the carved out cake, so I had to do some damage control.

Overall, I think it turned out pretty good for a first timer.