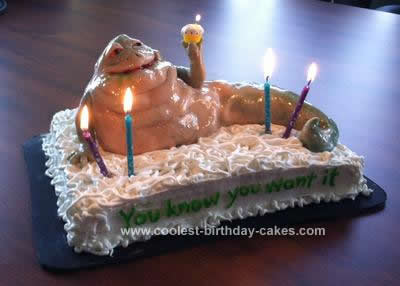 I’m a graphic artist at an icing/cake decorating manufacturer, so I’ve started using these free art supplies for coworkers’ birthdays. I had the idea for this Jabba the Cake a month before it was time to make it, and imagined how it would go together: A Rice Crispie Treat core, M&M eyes, and marbled fondant for skin. Of course, it had to be “worm-ridden” so I had Gummi Worms on hand. Birthday Girl and everyone else were in the middle of a weight-loss challenge, so I was going for a parody of temptation.

I got home from a travel weekend with all the goods at 2AM on the big day. My wife had graciously made the Rice Crispie Treat in advance. She’d used extra butter for better sculpt ability. I embedded the Gummis in it, then found I could rough out the face and rolls of fat with more Gummis, which stuck nicely to the still-sticky body. The arms would be solid fondant, added last.

Next it was time to make the skin. Betty Crocker Gel Food Colors made short work of making all the fondant tan. Then I added blue and green to half that fondant to make the dark green. I rolled the two together into an over sized skin and cut out the best tan/green area for the transition from face/underbelly to back. This draped nicely over the armless blob of a body, which already had a gash cut for the smile. An M&M held the mouth open and looked like a tongue. Two more M&Ms made eyes, and scraps from the skin made eyelids. The unused fondant was plenty for making the arms. I had finished sculpting my Jabba by 4AM, in 2 hours flat.

Now at work, I used Decorating Gel tubes for the pupils, and coloring inside the mouth. I brushed dots of green gel out from the mouth. For the final disgusting touch, I brushed pastry glaze over the whole skin, being careful not to smear any of the gels.

Nearly out of time, I iced the bottom cake (also made in advance) with BC canned icing. Border and top were left squiggly to enhance the gross effect, but mostly to save time. The BC cupcake candle almost comes like that; I removed the sticks and melted two halves together.

It turned out to be a double birthday. Jabba got all the attention and pictures, but the non-ironic Publix Chocolate/dipped strawberry cake got eaten. Jabba is in the birthday girl’s freezer, awaiting some future occasion. 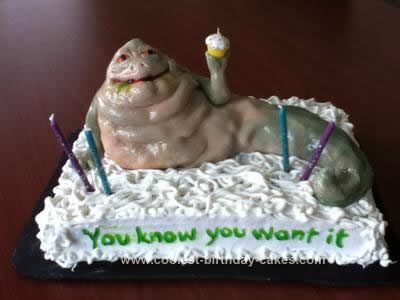