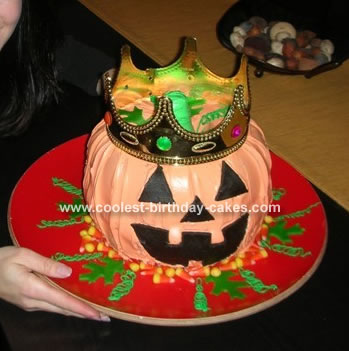 I made a Jack O Lantern pumpkin cake for my friend’s anniversary party, married on Halloween! I wanted to make something original but recognizable.

I made the Jack-O-Lantern from 2 bundt pans with a 9 inch round cake in between the stacked bundt cakes. I used box cake mix, nothing fancy. I stacked the cakes and iced between them to hold them together.

I frosted the cake with orange canned frosting and used an ice cream cone as the stem of the pumpkin and frosted it green. I used marzipan to make the eyes, nose, mouth, and leaves on top of the cake. I colored the marzipan black, it’s true that all food colors mixed together make black! I cut the shapes out by hand using a small knife and stuck them on the front of the cake before the frosting hardened.