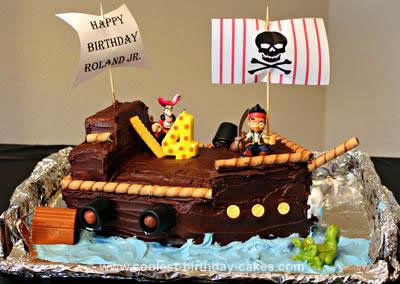 For this Jake & the Neverland Pirate Ship Cake I baked 2 (9×13) cakes. I sliced off a little from the top to make them stack evenly. Shape the front of the ship by using a bread knife and cutting into an arrow shape.

For the top back part I bought an angel food cake because it’s a thicker consistency and will hold up better. Use wooden skewers to secure parts of the boat. These will serve as your masts at the end. Next, I started frosting the pirate ship with a flat, frosting spatula. Make sure you put plenty on the spatula so you won’t get lots of crumbs. Be generous. This took some time because there are a lot of angles so be patient.

Once it’s all frosted it’s time for the fun part, decorating the ship. The straw-like cookies I bought from the Dollar Tree and placed them around the top and in the front of the ship. In order to get it to stick out without falling stick a wooden skewer inside the cookie and then stick the other end into the cake.

The ladder to the second level and the windows in the back of the ship are mini vanilla wafers. The yellow circles on the front/side of the ship are Gerber yogurt melts found in the baby food aisle. The white skull in the front of the ship is a cupcake ring. The “cannons” are the rubber stoppers you put on your chairs so they won’t scratch the floor. Of course, they are brand new! I had to use a knife to cut a slit on the bottom of these and then force a skewer through just enough so I could place a “cannon ball” inside.

The cannon balls are just whoppers. If anything won’t stick because the frosting is beginning to crust just add a dab of fresh frosting to whatever you want to stick on the cake and it’ll stay. I bought Jake & the Neverland pirates figurines from Walmart and used those on the ship. The water is just leftover frosting with food coloring. For the flags I just went online and gathered some free clipart and made the flags in Microsoft Word.

It’s not as hard as it seems. I hope this helps you out.

Coolest Jake and The Neverland Pirates