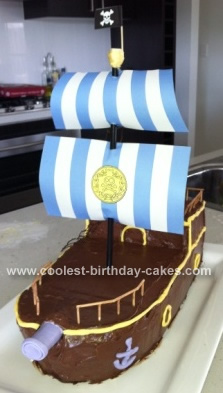 My son has been watching Jake and the Neverland Pirates and begged for a pirate party for his 6th birthday. Once we decided on a pirate ship cake, I knew it had to be just like Bucky.

I made two chocolate mud cakes in 18cmx28cmx7cm tins the night before the party. I cheated a little and used 2x choc mud cake packet mixes for each cake.

In the morning we assembled the cake. We added onto the first cake by using a third of the second cake for the bow (front) and another third for the top deck at the stern (back). The remaining third was just a back-up in case something went wrong!

We actually sliced through the middle of the main cake horizontally and spread a layer of icing to improve the flavor (it was worth it).

To ice, I just used ready-made choc icing. But for the yellow trim and for the canon I used royal icing. I made the canon the night before and let it dry overnight. I rolled it out to shape on baking paper then sliced off the end with a sharp knife. The only tip with the canon is that ours needed a skewer underneath pushed all the way into the cake for extra support as it started to crack.

Lastly, the mast was a 35cm knitting needle, the railings were skewers my man masterfully glued and painted, and there was rigging I knotted together from embroidery thread.

Hope this helps when you make your Jake and the Neverland Pirates Bucky Ship Cake!